The Nerdy Nummies Cookbook: Sweet Treats for the Geek in All of Us (Hardcover) 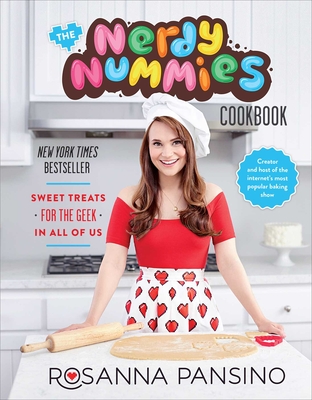 The first cookbook from the creator and host of the internet’s most popular baking show, Nerdy Nummies: a collection of Rosanna Pansino’s all-time favorite geeky recipes as well as sensational new recipes exclusive to this book.

The Nerdy Nummies Cookbook is quirky, charming, and fun, featuring the recipes behind Rosanna Pansino’s celebrated, one-of-a-kind creations, as well as beautiful, mouthwatering photographs throughout. It is the perfect companion that you’ll turn to whenever you want to whip up a delicious treat and be entertained all at once. And best of all, these treats are as simple as they are fun to make! No need for costly tools or baking classes to create these marvelous delights yourself.

The Nerdy Nummies Cookbook combines two things Rosanna loves: geek culture and baking. Her fondness for video games, science fiction, math, comics, and lots of other things considered “nerdy” have inspired every recipe in this book. You’ll find the recipes for many beloved fan favorites from the show, such as Apple Pi Pie, the Chocolate Chip Smart Cookie, and Volcano Cake; as well as many new geeky recipes, such as Dinosaur Fossil Cake, Moon Phase Macarons, and the Periodic Table of Cupcakes. The Nerdy Nummies Cookbook showcases Rosanna’s most original and popular creations, and each recipe includes easy-to-follow photo instructions and a stunning shot of the finished treat in all its geeky glory: a delicious confection sure to please the geek in all of us!

Rosanna Pansino is an award-winning YouTube star, baker, entrepreneur, and author. Her first book, The Nerdy Nummies Cookbook, is a New York Times bestseller. She also created and hosts Nerdy Nummies, the internet’s most popular baking show. Pansino launched her YouTube channel in 2011 and since then her videos have been viewed more than 2.5 billion times. With more than 10 million subscribers, Rosanna is one of the most-watched and followed personalities on the internet. In 2015, she executive produced and hosted two holiday food specials on the Cooking Channel. In 2017, she partnered with Wilton to launch her own branded line of baking tools and was named the top food influencer of the year by Forbes. She currently lives in Los Angeles with her family and dog Cookie.