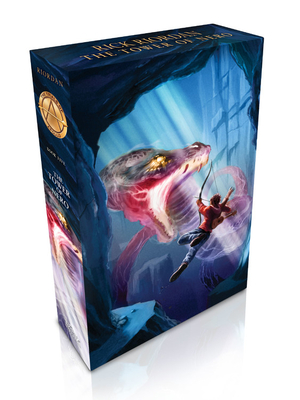 This is book number 5 in the Trials of Apollo series.

Rick Riordan collectors won't want to miss this signed limited edition of the finale of the Trials of Apollo series.
Complete your Trials of Apollo collection with this signed and numbered limited edition with exclusive frontispiece art by series illustrator John Rocco and a handsome full-color case.
Lester's demigod friends at Camp Jupiter just helped him survive attacks from bloodthirsty ghouls, an evil Roman king and his army of the undead, and the lethal emperors Caligula and Commodus.
Now the former god Apollo and his demigod master Meg must follow a prophecy uncovered by Ella the harpy. Lester's final challenge will be at the Tower of Nero, back in New York.
Will Meg have a last showdown with her father?
Will this weak form of Apollo have to face his arch nemesis, Python?
Who will be on hand at Camp Half-Blood to assist?
These questions and more will be answered in the breathtaking, action-packed finale of the Trials of Apollo series.


John Rocco (www.roccoart.com) studied illustration at the Rhode Island School of Design and the School of Visual Arts. In addition to writing and illustrating several of his own picture books, including Blizzard and the Caldecott Honor-winning and New York Times best-selling Blackout, he has created all of the cover art for Rick Riordan's best-selling Percy Jackson, Kane Chronicles, Heroes of Olympus, Magnus Chase and the Gods of Asgard, and Trials of Apollo series. He collaborated with Rick on two #1 New York Times best-selling collections of Greek myths for the whole family: Percy Jackson’s Greek Gods and Percy Jackson’s Greek Heroes, as well as The Lightning Thief Illustrated Edition.

PRAISE FOR THE TYRANT'S TOMB