Syria and Lebanon 1941: The Allied fight against the Vichy French (Campaign) (Paperback) 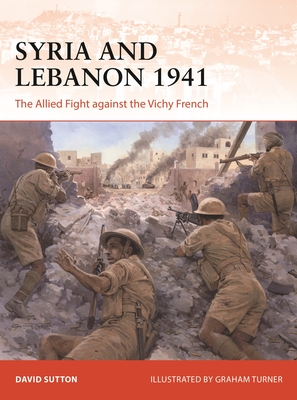 A detailed study of the Syrian and Lebanon campaign of World War II.

In June 1941, Australian, British, Indian, and Free French forces invaded the Vichy French-controlled Mandate of Syria and Lebanon. They were outnumbered, and faced an enemy that had more artillery, tanks, and aircraft. They fought in rocky, mountainous terrain, through barren valleys and across swollen rivers, and soon after the initial advance faced a powerful Vichy French counterattack on key strategic positions. Despite these difficulties, the Allies prevailed, and in doing so ensured that the territory did not fall into German or pro-German hands, and thus provide a springboard from which Axis forces could attack British oil interests in Iraq, or the key territory of Palestine. This book examines the high military and political strategy that lay behind the campaign, as well as the experiences and hardships as endured by the men on the ground. The battles in Syria and Lebanon were complex actions, often at the battalion level or below, and this work uses extensive war diaries and records available to make sense of the actions and examine how they affected the wider campaign.

Dr David Sutton is a historian in the Military History Section at the Australian War Memorial in Canberra, Australia. He specializes in World War II, in particular the early stages of the Nazi–Soviet War, and Australian actions in Europe, the Middle East and North Africa. His doctoral thesis focused on operations Barbarossa and Typhoon, in particular, Hitler's drive towards Moscow in 1941.

Graham Turner is a leading historical artist, specializing in the medieval period. He has illustrated numerous titles for Osprey, covering a wide variety of subjects from the dress of the 10th-century armies of the Caliphates, through the action of bloody medieval battles, to the daily life of the British Redcoat of the late 18th century. The son of the illustrator Michael Turner, Graham lives and works in Buckinghamshire, UK.