We the People: The Story of Our Constitution (Paperback) 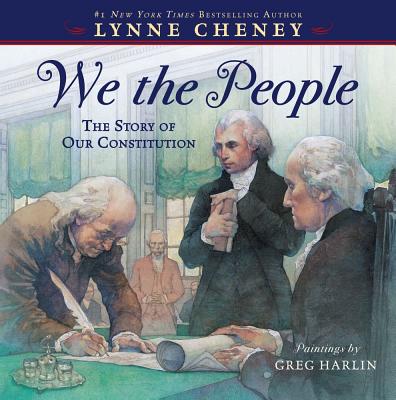 Now in paperback, Lynne Cheney’s New York Times bestselling illustrated history of how the Constitution came to be.

“I am mortified beyond expression when I view the clouds which have spread over the brightest morn that ever dawned upon any country.” —George Washington

America had won the Revolution, but our troubles were far from over. The thirteen states were squabbling, the country could not pay its bills, and in Massachusetts farmers had taken up arms against the government. Was our country, which had fought so hard for its independence, going to survive?

In May 1787 delegates from across the country—including George Washington, James Madison, and Benjamin Franklin—gathered in Philadelphia and, meeting over the course of a sweltering summer, created a new framework for governing: the Constitution of the United States. Their efforts turned a shaky alliance of states into a nation that would prosper and grow powerful, drawing its strength for centuries to come from “We the people” and inspiring hope for freedom around the world.

Now in paperback for the first time, this richly illustrated tale of a crucial point in our nation’s history will enthrall readers young and old.

Lynne Cheney’s most recent book is the New York Times bestseller, We the People: The Story of Our Constitution, illustrated by Greg Harlin. She is also the author of the New York Times bestsellers America: A Patriotic Primer, A Is for Abigail: An Almanac of Amazing American Women, When Washington Crossed the Delaware: A Wintertime Story for Young Patriots, A Time for Freedom: What Happened When in America, and Our 50 States: A Family Adventure Across America, and has written a memoir, Blue Skies, No Fences. Mrs. Cheney is a senior fellow at the American Enterprise Institute and former chair of the National Endowment for the Humanities. She lives in Washington, DC, with her husband, Vice President Richard B. Cheney.

Greg Harlin is an acclaimed artist and illustrator. His books for children include Dangerous Crossing, Paul Revere's Midnight Ride, Mississippi, and Hanukkah at Valley Forge, winner of the 2007 Sydney Taylor Book Award. He has spent much of his twenty-eight working years recreating history through his paintings. His work has appeared in many national periodicals, including National Geographic, National Park Service publications, and Kids Discover magazine, and has received award recognition from the Society of Illustrators and American Illustration, among other entities. Mr. Harlin lives in Annapolis, Maryland.