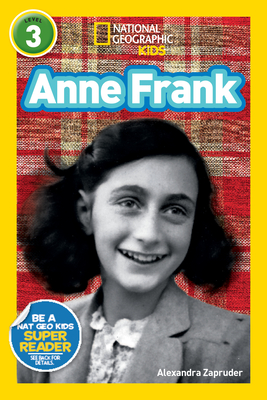 Anne Frank is one of the first of many National Geographic Readers that highlight important historical figures. This level-3 reader brings an understanding of her historical significance to a whole new audience. Young readers will learn about the brave and tragic life of the young girl whose diary kept while in hiding from Nazis is one of the most important and insightful books of the World War II era. National Geographic Readers: Anne Frank explores not just the diary, but her life and the important role she played in 20th-century history.

ALEXANDRA ZAPRUDER is a writer and editor based in the Washington, D.C. area. She is the author of Salvaged Pages: Young Writers' Diaries of the Holocaust (Yale University Press, 2002), which won the National Jewish Book Award in the Holocaust category in 2002. She co-authored Nazi Ideology and the Holocaust (U.S Holocaust Memorial Museum, 2006) and edited the forthcoming Diary of Rywka Lipczyc.  She also wrote and co-produced the documentary film I'm Still Here: Real Diaries of Teenagers Who Lived During the Holocaust, which aired on MTV in 2005 and was nominated for two Emmy awards.