The Middle School Rules of Vontae Davis: As Told by Sean Jensen (Hardcover) 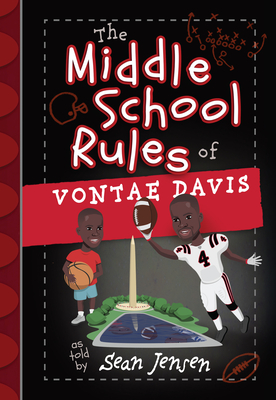 Before he became a first-round draft pick in the NFL, he had to survive middle school. Over one million boys play high school football every year. About 6.5% become collegiate players. Of those, only 1.5% reach the NFL. Those odds were daunting for a young Vontae Davis who endured many challenges as his parents battled addiction. At age 11, Vontae and his siblings faced living in separate foster homes, but Grandma Adaline refused to allow it--adopting and raising all seven children despite financial difficulties. With some guidance from his older brother Vernon (two-time Pro Bowl tight end) Vontae earned a college football scholarship, and after three years entered the NFL. The Middle School Rules of Vontae Davis features Vontae's defining childhood stories and lessons learned growing up in a rough Washington D.C. neighborhood. Young readers will see how Vontae thrived with the support of those around him--none more important than his grandmother. A two-time Pro Bowl selection, Vontae was named an NFL Players Association Community MVP during the 2015 season.

SEAN JENSEN was born in South Korea. He was adopted and grew up in California, Massachusetts, and Virginia, mostly on or near military bases. Given his unique background, he's always been drawn to storytelling, a skill he developed at Northwestern University and crafted as a sportswriter for the last 16 years, almost exclusively covering the NFL. During his career, he's fostered strong relationships with athletes in multiple sports, and penned award-winning features on Derrick Rose and Jared Allen, among others. Sean and his wife make their home in Hopkins, MN with their two children.