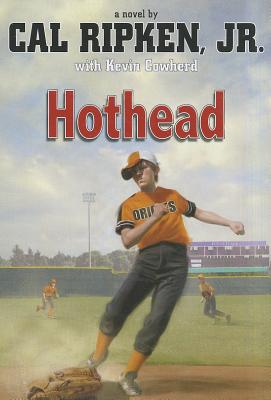 What do you do when you strike out big? Find out in this dramatic tale by All-Star shortstop Cal Ripkin.

Connor Sullivan is an All-Star shortstop on his Babe Ruth team, the Orioles. He can hit and field with the best of them, but he's got one big problem: his temper. When he strikes out or makes an error, he's a walking Mt. Vesuvius, slamming batting helmets and throwing gloves. His teammates are starting to avoid him, even his best friend Jordy. His coach is ready to kick him off the team. To make matters worse, things aren't much better at home. His dad is having trouble finding a new job after being laid off. Money is tight.

Connor's dream of attending the prestigious Brooks Robinson Baseball Camp this summer seems like just that now -- a dream. When the sports editor of the school paper threatens to do a big story on his tantrums -- complete with embarrassing photos -- Connor realizes he has to clean up his act. But can he do it in time to regain his teammates' trust and help the Orioles win the championship against the best team in the league?

Cal Ripken, Jr. was a shortstop and third baseman for the Baltimore Orioles for his entire career (1981-2001). Nicknamed "The Iron Man" for his relentless work ethic and reliability on the field, Ripken is most remembered for playing a record 2,632 straight games over 17 seasons. He was a 19-time All Star and is considered to be one of the best shortstops professional baseball has ever seen. In 2007 he was inducted into the National Baseball Hall of Fame. Since his retirement Ripken has worked as President and CEO of Ripken Baseball, Inc. to nuture the love of baseball in young children from a grassroots level. His Cal Ripkin Baseball Division is a division of the Babe Ruth League and welcomes players ages 4-12. Cal currently lives in Maryland with his wife and two children.


Kevin Cowherd has been a writer for the Baltimore Sun since 1987, is nationally syndicated by the Los Angeles Time - Washington Post news service, and is the author of Last Call at the 7-Eleven, a book of selected writings published by Bancroft Press. In 1990 he was honored by the American Association of Sunday and Feature Editors for excellence in feature writing. He currently writes a sports column and blog for the Baltimore Sun. He is also a humorist, and an experienced Little League coach. He lives with his wife and three children near Baltimore.