The Light on Sifnos (Paperback) 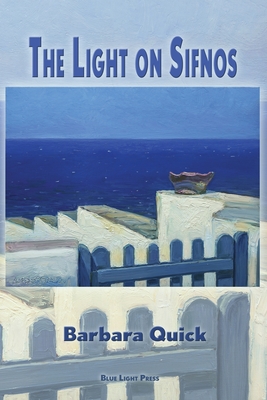 Poet and writer Barbara Quick is best known as author of the internationally bestselling novel Vivaldi's Virgins, which has been translated into a dozen languages. Her first novel, Northern Edge, won the Discover: Great New Writers prize. Her fourth novel, What Disappears, is being launched by Regal House in 2022. Some of Barbara's poems have been recorded by Garrison Keillor and featured on The Writer's Almanac. She has been the featured guest on Grace Cavalieri's long-running program from the Library of Congress, "The Poet and the Poem." Barbara's essays, poems and book reviews have been published in many periodicals, including the New York Times Book Review, Newsweek, the Annals of Internal Medicine, the Journal of Humanistic Mathematics, the San Francisco Chronicle, Canary, the Monterey Poetry Review and other literary journals, both print and online. Her poems have been anthologized in These Trees, a large-format art book by photographer Ruthie Rosauer; Fire and Rain: Ecopoetry of California (co-edited by Lucille Lang Day and Ruth Nolan for Scarlet Tanager Books); Fog and Light: San Francisco through the Eyes of the Poets Who Live Here (Diane Frank, Editor, Blue Light Press); Pandemic Puzzle Poems (Diane Frank and Prartho Sereno, Editors, Blue Light Press). Based on a small farm and vineyard in the California Wine Country with her husband Wayne Roden, a vigneron and long-time violist with the San Francisco Symphony, Barbara takes Brazilian dance classes whenever possible.

Barbara Quick is a novelist of international reputation, and her skills are evident here, with characters we can believe; an atmosphere we can feel; and interior thoughts that deepen her observation. Every poem is a small story with personality and purpose- lines that flow like silk, holding words precise in every note. Quick gives us an island where we can go whenever we want to make beauty our own and rest in the company of flawless writing. Poetry has good reason to celebrate today.

"Praise the wisdom of the wanderers / who kiss the earth, at last / returning home," Barbara Quick tells us in the final poem of The Light on Sifnos, and the reader feels satisfied with the rightness of the ending for such a beautifully rendered journey through light and dark, time and timelessness. In poems written as she read Emily Wilson's new translation of Homer's Odyssey, Quick's language is as lyrical as it is accessible. While her dead are as vividly present as the living, her keen awareness of mortality doesn't interfere with the giddy release from the quotidian that travel can bring, as when she plunges naked into the Aegean to join her "selkie mate." There's deep joy in these poems. There's also deep wisdom, fully deserving of praise.

- Lynne Knight, author of The Language of Forgetting

The haunting power of this collection is not epic, but Sapphic: mysteries rising from a handful of fragments gleaming in the sun. Barbara Quick's Sifnos is a place of elemental beauty, alive with the Attic past, peopled with the ghosts still living, still wandering with the other shades in the poet's soul as she navigates her way (with her father's old compass) through this world, "the future home of all we are and all we dream / in gleaming transit through the dark."