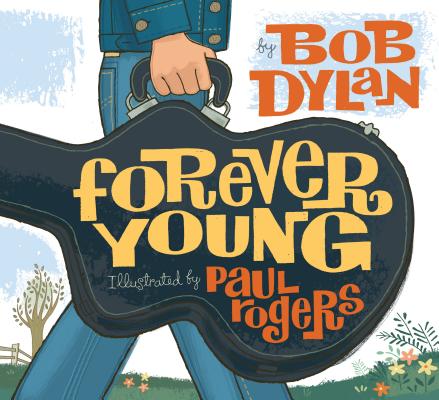 By Bob Dylan, Paul Rogers (Illustrator)
$18.99
Out of stock. Available to order.

WINNER OF THE NOBEL PRIZE IN LITERATURE

The classic anthem to youth from Bob Dylan, one of our best-loved songwriters, reimagined as a picture book by award-winning illustrator Paul Rogers.

Since it first appeared on the 1974 album Planet Waves, "Forever Young" has been one of Bob Dylan's most beloved songs. Now award-winning artist Paul Rogers gives us a new interpretation of the lyrics. With images inspired by classic Dylan songs and pieces of his life, this is a bold and touching tribute to an anthem whose message will always stay forever young.

Bob Dylan has released thirty-eight studio albums, which collectively have sold over 120 million copies around the world. He won the Nobel Prize in Literature and has been awarded the French Legion of Honor, a Pulitzer Prize Special Citation, and the Presidential Medal of Freedom, the country’s highest civilian honor. His memoir, Chronicles: Volume One, spent a year on the New York Times bestseller list.

Paul Rogers is the illustrator of Wynton Marsalis's book Jazz ABZ. In addition to illustrating children's books, he has created images for the New York Times, Pixar Animation Studios, the New Orleans Jazz & Heritage Festival, and the NFL's Super Bowl. He lives with his wife, Jill, and his two children, Alex and Nate, in Pasadena, California.