Blinded by the Right: The Conscience of an Ex-Conservative (Paperback) 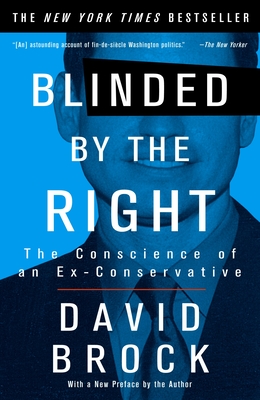 In a powerful and deeply personal memoir David Brock, the original right-wing scandal reporter, chronicles his rise to the pinnacle of the conservative movement and his painful break with it.

David Brock pilloried Anita Hill in a bestseller. His reporting in The American Spectator as part of the infamous “Arkansas Project” triggered the course of events that led to the historic impeachment trial of President Clinton. Brock was at the center of the right-wing dirty tricks operation of the Gingrich era—and a true believer—until he could no longer deny that the political force he was advancing was built on little more than lies, hate, and hypocrisy.

In Blinded By the Right, Brock, who came out of the closet at the height of his conservative renown, tells his riveting story from the beginning, giving us the first insider’s view of what Hillary Rodham Clinton called “the vast right-wing conspiracy.” Whether dealing with the right-wing press, the richly endowed think tanks, Republican political operatives, or the Paula Jones case, Brock names names from Clarence Thomas on down, uncovers hidden links, and demonstrates how the Republican Right’s zeal for power created the poisonous political climate that culminated in George W. Bush’s election.

With a new afterword by the author, Blinded By the Right is a classic political memoir of our times.

David Brock, a writer in Washington, D.C., is the author of The Real Anita Hill and The Seduction of Hillary Rodham. He has written for Esquire, New York, Rolling Stone, Talk, and the New York Times and Washington Post op-ed pages. He appears regularly on television talk shows, and his work has been featured on National Public Radio.

“A chilling portrait . . . of a partisan attack machine.”—Washington Post

“A key document for historians seeking to understand the ethos of the incoherent ’90s.”—New York Times
“A cracking good story . . . Blinded by the Right is . . . something that is owed not only from its author but also from the political cadre he has so spectacularly served and forsaken: an apology.”—The New Yorker

“Anyone wishing to understand America in the 1990s will have to read [Brock’s] book.”—Los Angeles Times

“A fascinating look into the murky world of the politics of personal destruction.”—USA Today

“A mea culpa for an entire era.”—New York Times Magazine

“You cannot fully understand this fevered era without reading this book.”—The Nation

“If you’re looking for proof of corruption and immoral behavior among the nation’s most famous conservatives—read this book.”—Bill Press, CNN