All Heart: My Dedication and Determination to Become One of Soccer's Best (Paperback) 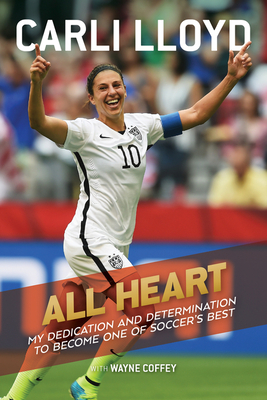 Two-time FIFA Player of the Year Carli Lloyd tells her inspirational story of going from nearly quitting soccer to the number one player in the world in this young reader’s edition of her memoir When Nobody Was Watching, now available in paperback.

There was a time when Carli Lloyd almost quit soccer. Then she met James Galanis, a trainer who believed in her and saw her as a player with rare talent and skill who needed to work on her weaknesses. He offered to help her, but only if she made soccer her number one priority. Carli said yes.

In her own words, Carli Lloyd, the two-time recipient of the FIFA World Player of the Year award, tells her inspirational story of going from near defeat to the ultimate goal. All Heart is for players, fans, coaches, dreamers, and anyone who has ever thought about giving up.

CARLI LLOYD is captain of the U.S. Women's National Soccer Team and has been named the FIFA World Player of the Year for two years in a row (2015 and 2016). The midfielder led the U.S. team to World Cup victory in 2015 and also scored the gold-medal winning goals in both the 2008 and 2012 Olympics. She has played in three FIFA Women's World Cup tournaments, helping the U.S. win bronze, silver and then gold. In 2015 she was also awarded the FIFA Golden Ball and the Silver Boot. The New Jersey native currently plays for Manchester City Women FC in England. Follow Carli at carlilloyd.com or on Twitter @CarliLloyd.


WAYNE COFFEY is an award-winning sports journalist and the author of more than thirty books, including such New York Times bestsellers as The Closer with Mariano Rivera; Wherever I Wind Up with R. A. Dickey; and Above the Line with Urban Meyer.

"While soccer fans will especially enjoy the detailed descriptions of key matches from her career, there’s much to glean about teamwork and determination for any teen. An inspiring story of perseverance." —Booklist   "Not for lovers of soccer only: readers after inspiration to keep playing, regardless of the odds, will find plenty here." —Kirkus   "...the central themes of hard work, diligence, ambition, and tenacity make Lloyd’s story an inspiration for all readers, especially tweens looking for strong role models." —School Library Journal —