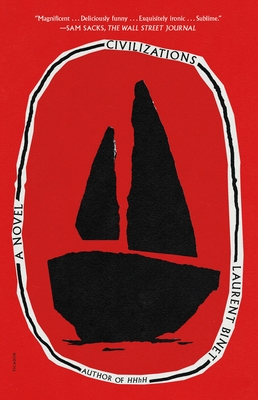 A literary ‘what if’ for your consideration... what if Vikings settled in the Caribbean and the indigenous population didn’t all die of small pox? Then when Columbus arrived, he was captured, tortured, & killed by healthy, Thor-worshiping Incas. And when he didn’t return home, the Spanish decided there was no point in exploring westward anymore, so the Incas came to Europe instead – easily conquering the complacent Spanish & Portuguese. Atahualpa becomes the king of western Europe (known as “the New World”) & Holy Roman Emperor, while creating a more just & equal society in the process. Oh, and the Aztecs conquer France too. Huzzah! A masterful work of speculative fiction that’s playful & funny & smart, while also illuminating as to how easily the history of colonization could have been written altogether differently. -sm

An ambitious and highly entertaining novel of revisionist history from the author of the international bestseller HHhH, Laurent Binet’s Civilizations is nothing less than a strangely believable counterfactual history of the modern world, fizzing with ideas about colonization, empire building, and the eternal human quest for domination. It is an electrifying novel by one of Europe’s most exciting writers.

Freydis is the leader of a band of Viking warriors who get as far as Panama. Nobody knows what became of them . . .

Five hundred years later, Christopher Columbus is sailing for the Americas, dreaming of gold and conquest. Even after he is captured by the Taínos, his faith in his superiority and his mission is unshaken.

Thirty-nine years after that, Atahualpa, the last Inca emperor, arrives in Europe. What does he find? The Spanish Inquisition, the Reformation, capitalism, the miracle of the printing press, endless warmongering between the ruling monarchies, and constant threat from the Turks. But most of all, downtrodden populations ready for revolution. Fortunately, he has a recent guidebook to acquiring power—Machiavelli’s The Prince. It turns out he is very good at it. So, the stage is set for a Europe ruled by Incas and for a great war that will change history forever.

Laurent Binet was born in Paris, France, in 1972. His first novel, HHhH, was named one of the fifty best books of 2015 by The New York Times and received the Prix Goncourt du Premier Roman. He is a professor at the University of Paris III, where he lectures on French literature. His other novels include The Seventh Function of Language and Civilizations.

Sam Taylor has written for The Guardian, Financial Times, Vogue and Esquire, and has translated such works as the award-winning HHhH by Laurent Binet, and the internationally-bestselling The Truth about the Harry Quebert Affair by Joël Dicker.

“At once a profoundly thoughtful book and a very playful one . . . Civilizations is a page-turner. Credit here goes to both Binet and his translator, Sam Taylor, whose English prose is clipped, opinionated, and vivid . . . Civilizations is a serious success, in every sense of the word serious. If you read one novel this fall, make it this.”
—Lily Meyer, NPR

“Glorious . . . Beneath the simple pleasure of a good story well told—and superbly translated by Sam Taylor—runs Binet’s signature brand of high-concept playfulness . . . He is a writer as interested in history as he is in playing with it, and a joker of the most intellectual variety . . . [Civilizations] is his best book yet: the work of a major writer just hitting his stride.”
—Tim Smith-Laing, The Telegraph (Best Books of the Year)

“An alternate history novel for the ages.”
—K.W. Colyard, Bustle (Most Anticipated)

“Civilizations exists on a whole different tier of ambition . . . You can sense how much fun Binet is having, rearranging the cultural collage and inverting the power dynamics.”
—Michael LaPointe, The Times Literary Supplement

“Tremendous fun . . . A world-historical version of the parlour game where you assemble a fantasy dinner party from the past.”
—Sam Leith, The Guardian

“In a mix of historical characters (including Columbus and Cervantes) and fictional ones, Binet really lets himself imagine another world so different from our own, and it’s easy to get lost in his storytelling.”
—Emily Burack, Alma (Best Books of Fall)

“A bold and thrilling experiment in counterfactual history from a masterful storyteller.”
—Ángel Gurría-Quintana, Financial Times

“This translation of Binet’s ambitious work imagines a fascinating alternate universe where colonialism turned out rather differently . . . Recommended for all fans of what-ifs in history.”
—Sarah Rice, Booklist