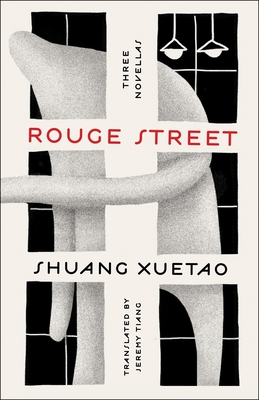 "Rouge Street gives voice to an intriguing cast of characters left behind by China’s economic miracle . . . Shuang pulls no punches . . . From start to finish, his scope is close to the ground, his language sparingly emotive and unobtrusive. He never flinches. As a result, we don’t look away either."
—Jing Tsu, The New York Times Book Review (Editors' Choice)

Introduced by Madeleine Thien, author of the Booker finalist novel Do Not Say We Have Nothing

From one of the most highly celebrated young Chinese writers, three dazzling novellas of Northeast China, mixing realism, mysticism, and noir.

An inventor dreams of escaping his drab surroundings in a flying machine. A criminal, trapped beneath a frozen lake, fights a giant fish. A strange girl pledges to ignite a field of sorghum stalks.

Orbiting the toughest neighborhood of a postindustrial city whose vast, inhospitable landscape makes every aspect of life a struggle, these many-voiced missives are united by Shuang Xuetao’s singular style—one that balances hardscrabble naturalism with the transcendent and faces the bleak environs with winning humor. Rouge Street illuminates not only the hidden pains of those left behind in an extraordinary economic boom but also the inspirations and grace they, nevertheless, manage to discover.

Shuang Xuetao is one of the most highly celebrated young Chinese writers. Born in 1983 in the city of Shenyang, Shuang has written six volumes of fiction, for which he has won the Blossoms Literary Prize, the Wang Zengqi Short Story Prize, and, most recently, the Blancpain-Imaginist Literary Prize for the best Chinese writer under forty-five. His short stories and novellas, including “Moses on the Plain,” have been adapted into major television productions and feature films. Rouge Street is his first book to appear in English. Shuang lives in Beijing.

"These stories unfold in northeast China, centered on the author’s home city, Shenyang, a region that has had little literary representation available to English speakers . . . For all the bleakness that his characters encounter there—violence, poverty, retribution—there are moments of possibility and levity, too."
—Joumana Khatib, The New York Times ("12 New Books Coming in April")

"In sparse, vernacular prose, Shuang uses fabulist noir to evoke the pace of social change . . . 'The past has nothing to do with the present,' one character admonishes, and Shuang’s multi-voiced narratives both challenge and confirm that maxim, conveying the contested legacies of recent Chinese history."
—The New Yorker ("Briefly Noted")

"[Rouge Street] turns . . . from the powerfully realistic to the fantastical and surreal, in an existential theater reminiscent of Pirandello or Sartre . . . Shuang weaves with Dostoevskian skill the voices and experiences of the players in this drama . . . Through various monologues, the novella creates not just a suspenseful thriller, but a textured, rich portrait of a community over time."
—Claire Messud, Harper's Magazine

"[Shuang Xuetao is] one of the most promising Chinese writers of his generation . . . Shuang’s characters share this affliction: they are abandoned by the state, by their biological families, by the socialist lifeworlds that nourished them. They collect along Rouge Street, a road that provides temporary respite for criminals, orphans, heretics, and minor deities—all exiles from Chinese modernity."
—Henry Zhang, Guernica

"Remarkable . . . enigmatic . . . The three novellas in Rouge Street…feature multilayered voices revealing intricate perspectives that result in gloriously gratifying rewards . . . His crisp, unadorned sentences might seem to contrast his fantastical twists and turns, but that irresistible combination is waiting to be discovered by lucky new audiences."
—Terry Hong, Shelf Awareness

"Shuang makes his English-language debut with three beautifully spare novellas exploring present day northeast China and the imprints of the past . . . Shuang sustains a cool, placid tone, even when reckoning with lingering traumas . . . Readers will be glad to get to know this rising star."
—Publishers Weekly

"Magical and gritty . . . An ambitious portrait of the struggle to thrive in the Chinese equivalent of the 'American Wild West' . . . Shifting continuously among the perspectives of multiple characters and sometimes reaching across generations, Shuang blurs the boundaries among memory, imagination, and historical events . . . Readers . . . will be rewarded with a surreal portrait of how history is made and remembered—expanding and contracting like an Escher cityscape."
—Kirkus Reviews

"Set in Shenyang, a post-industrial city in the northeast of China, Xuetao’s novellas are as beautifully frigid and gritty as the city he writes about, as he inspects the dust left following an economic boom, and the things that percolate in spite of loss and unfulfilled promise.”
—Literary Hub ("Most Anticipated Books of 2022")

"Set in a New York-sized city in the chilly climes of northwestern China, the three novellas in Shuang Xuetao’s Rouge Street attempt to capture real lives lived on the boundary between fantasy and reality. As gritty as it is hopeful, this collection from an established voice in Chinese literature is one of the year’s most anticipated English translations."
—Bustle ("Most Anticipated Books of April 2022")

"Shuang Xuetao presents a vivid picture that captures the various voices of Shenyang’s natives . . . Shuang’s stories are fundamentally about hope, aspiration, and resilience.”
—The Millions ("Most Anticipated Books of 2022")

"Jaw-droppingly brilliant . . . I can only hope that we see more of Xuetao's work translated in the coming years."
—Ian Mond, LOCUS

"Shuang Xuetao is a magician, suffusing failed lives with redemption and even delight. These are families out of Greek tragedy, rich intergenerational dramas reminiscent of Bi Feiyu's Three Sisters, as evocative of a particular time and place in China, detailed and strange and heartbreaking. But above all the darkness is a lighter and more generous vision of people who can survive China's great changes and yet still forgive, invent, and sail off into futures you would never expect."
—David Vann, author of Aquarium and Caribou Island

“The three novellas of Rouge Street give us an acerbic view of a chilly industrialized region, abject and desolate, tempered by Shuang Xuetao’s inability to form a petty thought and his generous, sometimes humorous tolerance of ambiguity.”
—Susanna Moore, author of In the Cut and Miss Aluminum

“What draws me to Shuang Xuetao's work is his superlative language, his short, playful, muscular sentences. His down-to-earth narratives unfold at a leisurely pace, yet they remain powerful. The result is a singular mode of storytelling.”
—Mo Yan, Nobel Prize–winning author of Red Sorghum

“Shuang Xuetao is the most distinctive young Chinese writer. With lyrical language and uncanny narration, he expresses the intense love that literature has for humanity—especially its lowest order. To read his writing is to have your heart pierced, as well as to experience the power of art, which can be a beam of light slicing through the darkness.”
—Yan Lianke, author of The Day the Sun Died

“Shuang Xuetao's meteoric rise in the last few years is a testament to the power of his writing. He has clearly been influenced by modernism—Wang Xiaobo, Hemingway and Murakami are all his mentors.”
—David Der-wei Wang, Edward C. Henderson Professor of Chinese Literature, Harvard University

“We unanimously hailed the author's adventurous spirit and thanked him for creating a literary magnetic field that teaches us new ways to spin.”
—Su Tong, author of Raise the Red Lantern, in the citation for the 2020 Blancpain-Imaginist Award

“Growing up amid the decay of China’s industrial base, Shuang Xuetao writes with a devastating sense of decline. His words may conform to conventional realism, yet they radiate a mysterious aura that cannot be dispelled.”
—Yu Hua, author of To Live and Chronicle of a Blood Merchant