Long Live Latin: The Pleasures of a Useless Language (Paperback) 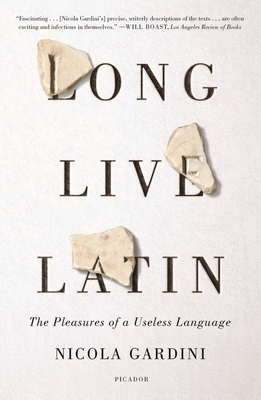 By Nicola Gardini, Todd Portnowitz (Translated by)
$17.00
On Our Shelves Now

From the acclaimed novelist and Oxford professor Nicola Gardini, a personal and passionate look at the Latin language: its history, its authors, its essential role in education, and its enduring impact on modern life—whether we call it “dead” or not.

What use is Latin? It’s a question we’re often asked by those who see the language of Cicero as no more than a cumbersome heap of ruins, something to remove from the curriculum. In this sustained meditation, Gardini gives us his sincere and brilliant reply: Latin is, quite simply, the means of expression that made us—and continues to make us—who we are. In Latin, the rigorous and inventive thinker Lucretius examined the nature of our world; the poet Propertius told of love and emotion in a dizzying variety of registers; Caesar affirmed man’s capacity to shape reality through reason; Virgil composed the Aeneid, without which we’d see all of Western history in a different light.

In Long Live Latin, Gardini shares his deep love for the language—enriched by his tireless intellectual curiosity—and warmly encourages us to engage with a civilization that has never ceased to exist, because it’s here with us now, whether we know it or not. Thanks to his careful guidance, even without a single lick of Latin grammar readers can discover how this language is still capable of restoring our sense of identity, with a power that only useless things can miraculously express.

Nicola Gardini is Professor of Italian and Comparative Literature at the University of Oxford. A novelist, poet, critic, translator, and painter, he is the author of numerous books. One of his recent novels, Lost Words, was awarded the Viareggio-Rèpaci Prize and the Zerilli-Marimò / City of Rome Prize for Italian Fiction. Long Live Latin was a bestseller in Italy and has been translated into several languages.

“Nicola Gardini’s paean to Latin belongs on the shelf alongside Nabokov’s Lectures on Literature. With a similar blend of erudition, reverence, and impeccable close reading, he connects the dots between etymology and poetry, between syntax and society. And he proves, in the process, that a mysterious and magnificent language, born in ancient Rome, is still relevant to each and every one of us.” —Jhumpa Lahiri, author of In Other Words

“Fascinating . . . [Gardini’s] precise, writerly descriptions of the texts are often exciting and infectious in themselves . . . For Gardini, the promise of Latin is that getting to the root of words, understanding what they meant before they got into Italian or English or any other Romance language, is getting at what underlies and defines our vexing Western culture . . . [The] translation ably captures Gardini’s bombast and fussiness alike.” —Will Boast, Los Angeles Review of Books

"In Long Live Latin, Nicola Gardini argues that it is worth studying not for its utility but simply because “Latin is beautiful . . . . The book emerges as an adoring “biography” of Latin as the greatest written language; maintaining throughout that the point of reading Latin authors is not to haul them into the present, under a banner of “relevance”, but rather to venture ourselves into the linguistic world of the ancients that helped create so much of Western literature from the philosophy of More, Spinoza and Descartes to the poetry of Petrarch, Dante and Milton." —Shmoit Dutta, Times Literary Supplement

"Gardini gives another reason for studying classical languages: 'The story of our lives is just a fraction of all history . . . life began long before we were born.' This is the very opposite of a practical argument—it is a meditative, even self-effacing one. To learn a language because it was spoken by some brilliant people 2,000 years ago is to celebrate the world; not a way to optimise yourself, but to get over yourself." —The Economist

"A love letter to the finest language ever created. I loved Latin at the age of 11 and I still do, though I’m not good at it. Gardini explains lucidly, compellingly and passionately how and why it is so elegant, beautiful, expressive and succinct. Go seek out your Aeneid parallel text and remind yourself." —Susan Hill, The Spectator

"In this spirited linguistic jaunt, novelist Gardini (Lost Words) makes a strong argument for studying a supposedly “dead language” to unlock its beauty, history, and continued liveliness . . . Anyone who embarks on such a voyage will find this a helpful and contagiously enthusiastic companion." —Publishers Weekly

“A loving tribute to Latin as well as a compelling response to those who would call the language ‘useless’ . . . [Gardini’s] enthusiasm is infectious. Whether new to the study or remembering Latin lessons from years ago, interested readers will appreciate his insights, both translational and social.” —Jennifer Oleinik, Shelf Awareness (starred review)

"Gardini . . . crafts each chapter so that it feels like an encounter. Offering numerous personal anecdotes from his own life, Gardini’s writing is warm and conversational yet scholarly." —Diane Scharper, National Review


“Nicola Gardini’s Long Live Latin is not only a learned crash course in the splendors of Latin literature, but also an inspiring demonstration on why Latin still matters. Passionate, wise, and, finally, ennobling, this is a must read for anyone with even a passing interest in the subject.” —Ann Patty, author of Living with a Dead Language: My Romance with Latin

“This love letter to Latin enthralls, illuminates, and convinces. Nobody could possibly describe Latin as a dead or useless language after reading it.” —David Crystal, author of How Language Works

“A brilliant reminder that the supposedly dead language is alive and kicking—and still the most influential language in the world.” —Harry Mount, author of Carpe Diem: Put a Little Latin in Your Life

“Highlighting the particular charms in the styles and attitudes of Latin’s greatest writers, this book will open many eyes to the unexpected pleasures of Latin.” —Nicholas Ostler, author of Empires of the Word: A Language History of the World

"Anyone who embarks on such a voyage will find this a helpful and contagiously enthusiastic companion." —Publishers Weekly