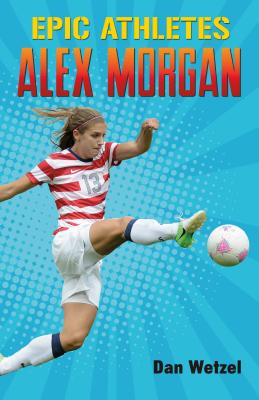 This is book number 2 in the Epic Athletes series.

U.S. Women's Soccer star Alex Morgan has earned each of these impressive titles throughout her incredible career. As a young girl growing up in Southern California, she dreamed of being a professional soccer player, fighting to compete on the international stage against the world's greatest athletes. Flash forward to the present and Alex Morgan has emerged as the face of U.S. Women's soccer, famous for her clutch, late-game goals, and an inspiration to kids across the country.

Bestselling author Dan Wetzel details the rise of an American champion in this uplifting biography for young readers, complete with dynamic comic-style illustrations.

New York Times bestselling author Dan Wetzel has been a Yahoo Sports national columnist since 2003. He's covered events and stories around the globe, including college football, the NFL, the MLB, the NHL, the NBA, the UFC, the World Cup, and the Olympics. For years, he's been called America's best sports columnist, appeared repeatedly in the prestigious Best American Sports Writing, and been honored more than a dozen times by the Associated Press Sports Editors. Dan was recently inducted into the U.S. Basketball Writers Hall of Fame.

* "Wetzel knows how to organize the facts and tell a good story. His insights into high school, collegiate, and professional basketball, along with his use of well-chosen quotes from insiders, make this book an unusually informative and enjoyable sports biography for young readers." —Booklist, starred review for Epic Athletes: Stephen Curry