The Light Years: A Memoir (Paperback) 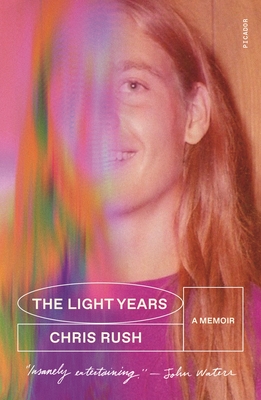 I’m not exactly sure how Chris Rush survived his own childhood, honestly, but don’t just write this off as a common drug memoir. His is an earnest, eloquent, compelling voice that completely surprised me in offering a complex, heartbreaking, beautifully told remembrance of an unusual youth. Essentially living in an odd sort of exile even while surrounded by both real and adopted families, he spent his teenage years taking & dealing drugs with abandon, hitchhiking across the country, chasing UFOs, living alone in the desert, and grappling with his sexuality on top of everything else. Chris’s story is one of resilience, perseverance, & his own youthful brand of self-instructed faith steeped heavily in LSD and a belief that the path forward would eventually reveal itself. The fact that he survived these early years – and his own family - to become a thriving adult and a successful artist is remarkable, inspiring, and plain wonderful. I think the comparisons to some of Denis Johnson’s early short fiction are apt – Rush is that good a crafter of scene, memory, and sentence that this memoir just might stand the test of time and become a classic remembrance of life as a kid on the fringes of society in the 1970’s. -sm

"This stunningly beautiful, original memoir is driven by a search for the divine, a quest that leads Rush into some dangerous places . . . The Light Years is funny, harrowing, and deeply tender." —Kate Tuttle, The L.A. Times

"Rush is a fantastically vivid writer, whether he’s remembering a New Jersey of 'meatballs and Windex and hairspray' or the dappled, dangerous beauty of Northern California, where 'rock stars lurked like lemurs in the trees.' Read if you loved… Just Kids by Patti Smith." —Leah Greenblatt, Entertainment Weekly

“As mythic and wild with love, possibility, and danger as the decades it spans, you’ll read The Light Years with your breath held. Brutal, buoyant and wise to the tender terror of growing up, Chris Rush has written a timeless memoir of boyhood in the American wilderness.” —Emma Cline, author of The Girls

Chris Rush was born into a prosperous, fiercely Roman Catholic, New Jersey family. But underneath the gleaming mid-century house, the flawless hostess mom, and the thriving businessman dad ran an unspoken tension that, amid the upheaval of the late 1960s, was destined to fracture their precarious facade.

His older sister Donna introduces him to the charismatic Valentine, who places a tab of acid on twelve-year-old Rush’s tongue, proclaiming: “This is sacrament. You are one of us now.”

After an unceremonious ejection from an experimental art school, Rush heads to Tucson to make a major drug purchase and, still barely a teenager, disappears into the nascent American counterculture. Stitching together a ragged assemblage of lowlifes, prophets, and fellow wanderers, he seeks kinship in the communes of the west. His adolescence is spent looking for knowledge, for the divine, for home. Given what Rush confronts on his travels—from ordinary heartbreak to unimaginable violence—it is a miracle he is still alive.

The Light Years is a prayer for vanished friends, an odyssey signposted with broken and extraordinary people. It transcends one boy’s story to perfectly illustrate the slow slide from the optimism of the 1960s into the darker and more sinister 1970s. This is a riveting, heart-stopping journey of discovery and reconciliation, as Rush faces his lost childhood and, finally, himself.

Chris Rush is an award-winning artist and designer, whose work is held in various museum collections. The Light Years is his first book.

"This memoir has been described as 'a queering of the wild,' which is an expression I could never forget. A gay child in a prosperous, Roman Catholic family in New Jersey during the ’60s is violently abused by his father, finds respite in a community of spiritual seekers, and embarks on an enlightenment journey that few humans could survive. This memoir will transport you all over the place while you shelter at home."
—Ottessa Moshfegh, Buzzfeed

"This stunningly beautiful, original memoir is driven by a search for the divine, a quest that leads Rush into some dangerous places . . . The Light Years is funny, harrowing, and deeply tender." —Kate Tuttle, The L.A. Times

"Rush is a fantastically vivid writer, whether he’s remembering a New Jersey of 'meatballs and Windex and hairspray' or the dappled, dangerous beauty of Northern California, where 'rock stars lurked like lemurs in the trees.' Read if you loved… Just Kids by Patti Smith." —Leah Greenblatt, Entertainment Weekly

“As mythic and wild with love, possibility, and danger as the decades it spans, you’ll read The Light Years with your breath held. Brutal, buoyant and wise to the tender terror of growing up, Chris Rush has written a timeless memoir of boyhood in the American wilderness.” —Emma Cline, author of The Girls

"In this vibrant memoir, artist Rush recounts his strange and colorful childhood and adolescence . . . Rush’s storytelling shines as he travels across the country and back again, searching for truth, love, UFOs in New Mexico, peace, something that feels like God, and a place to call home. This is a mesmerizing record of his journey through adolescence." —Publisher's Weekly (starred)

"In sparkling, lucid prose that perfectly captures the joy, depression, anger, and wonder that characterized his adventures, the author recounts the seemingly endless hills and valleys of his unique tale . . . readers will wish for more from this talented writer." —Kirkus Reviews (starred)

"What’s fresh and interesting about The Light Years is its account of gay survivalism—what it’s like to be rejected or adrift from others’ custody; coupling occasionally; at least once in love; and often in profound solitude in the natural world . . . The Light Years is less a queering of the wilderness than a wilding of queerness . . . In the tradition of Henry Adams, Richard Rodriguez, Michelle Tea, the book arrives at its genre: an education." —Brian Blanchfield, The New York Times Book Review

"[A] lucid miracle of [a] literary masterpiece . . . I wanted to talk to him about how he managed to come through the tsunami of the wildest memoir I’ve read, not only alive, but seemingly improved. How did he write a first book in such dazzling, sparkling prose—so incredibly deft in execution, so precise and artistic in naturalistic descriptions—and so loving in human portraiture? How did he get brought from the desert, to share with us this light?"—Luke Goebel, Vice

"The Light Years Is More Than a Queer Coming-of-Age Story. It’s a Quest for the Divine . . . filled with sentences lit from the inside like [Rush's] paintings" —Alexander Chee, Time

"Chris Rush . . . not only has one hell of a story, he also has the talent to bring it to life. You can open his gorgeous new memoir, The Light Years, to any page and the prose will leap out. It’s funny, charming and effortlessly descriptive." —Aaron Hicklin, Observer

"What’s most surprising, though, is the grace that can emerge from brutality. It’s a relief to read someone who’s waited long enough to not only document his rather extraordinary experience, but most importantly to have the wisdom to understand it . . . It’s hard to fathom how he got out alive. But thank goodness he did." —Minju Pak, T Magazine

“Brace yourself: To enter The Light Years you must be willing to be changed. It is, in the end, about the one question we all must ask ourselves—How does one live? In the end the answer is, always, love. You could wait until you are ready to read this radiant book, though how will you know when that moment arrives?” —Nick Flynn, author of Another Bullshit Night in Suck City

“Darkly comic and told with fire and wisdom, The Light Years is an iconic American story, the mad love child of Jack Kerouac, Timothy Leary, and Augustin Burroughs.” —Alexandria Marzano-Lesnevich, author of The Fact of a Body

“Chris Rush is a gorgeous, evocative writer—able to capture the stifling conventionality of suburbia but also the world of flower children drawn together by spiritual experimentation that all too easily gives way to heartbreak and violence. This moving book becomes a gripping story of resilience and, yes, hope.” —George Hodgman, author of Bettyville