How to Hide an Empire: A History of the Greater United States (Paperback) 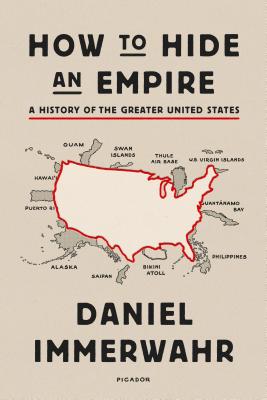 A fascinating, meticulously researched, & highly readable “revisionist history” of the US shown through the lens of the territories and colonies that have been at the outlying edges of the American empire. And despite what our history books have always told us, it is and has always been an empire, bent on cultural domination and capitalism. I’ve lost count of how many times I was completely shocked upon learning of some horrifying political policy I’ve long been oblivious to. Native Alaskan internment camps? Decades of pre-WWII government sanctioned war in the Philippines? Horrific medical testing in Puerto Rico? If you’re like me, shamefully unaware of much of American empire building history there is out there, Immerwhar will open your eyes wide. An absolutely riveting history that feels like an especially necessary historical perspective primer for any thoughtful citizen living in today’s America. -sm

We are familiar with maps that outline all fifty states. And we are also familiar with the idea that the United States is an “empire,” exercising power around the world. But what about the actual territories—the islands, atolls, and archipelagos—this country has governed and inhabited?

In How to Hide an Empire, Daniel Immerwahr tells the fascinating story of the United States outside the United States. In crackling, fast-paced prose, he reveals forgotten episodes that cast American history in a new light. We travel to the Guano Islands, where prospectors collected one of the nineteenth century’s most valuable commodities, and the Philippines, site of the most destructive event on U.S. soil. In Puerto Rico, Immerwahr shows how U.S. doctors conducted grisly experiments they would never have conducted on the mainland and charts the emergence of independence fighters who would shoot up the U.S. Congress.

In the years after World War II, Immerwahr notes, the United States moved away from colonialism. Instead, it put innovations in electronics, transportation, and culture to use, devising a new sort of influence that did not require the control of colonies. Rich with absorbing vignettes, full of surprises, and driven by an original conception of what empire and globalization mean today, How to Hide an Empire is a major and compulsively readable work of history.

Daniel Immerwahr is associate professor of history at Northwestern University and author of Thinking Small: The United State and the Lure of Community Development, which won the Organization of American Historians’ Merle Curti Prize. He has written for N+1, Slate, Dissent, and other publications.

"To call this standout book a corrective would make it sound earnest and dutiful, when in fact it is wry, readable and often astonishing. Immerwahr knows that the material he presents is serious, laden with exploitation and violence, but he also knows how to tell a story, highlighting the often absurd space that opened up between expansionist ambitions and ingenuous self-regard . . . It’s a testament to Immerwahr’s considerable storytelling skills that I found myself riveted by his sections on Hoover’s quest for standardized screw threads, wondering what might happen next." —Jennifer Szalai, New York Times

"[Immerwahr's] book is written in 22 brisk chapters, full of lively characters, dollops of humor, and surprising facts . . . It entertains and means to do so. But its purpose is quite serious: to shift the way that people think about American history . . . Immerwahr convincingly argues that . . . the United States replaced colonies with chemistry,' and partially 'substituted technology for territory.' It is a powerful and illuminating economic argument . . . the book succeeds in its core goal: to recast American history as a history of the 'Greater United States.' . . . deserves a wide audience, and it should find one." —Patrick Iber, The New Republic

“[How to Hide an Empire] is full of pop-culture references and interesting anecdotes that challenge common sense. Immerwahr’s point is not to condemn empire but to explain it. And by doing so, he helps us better understand American foreign and military policy in the present—and the future . . . At its best, Immerwahr’s book describes not only a forgotten history but a history of forgetting itself.” —Adrian Chen, New York

"Consistently both startling and absorbing . . . Immerwahr vividly retells the early formation of the [United States], the consolidation of its overseas territory, and the postwar perfection of its 'pointillist' global empire, which extends influence through a vast constellation of tiny footprints." —Harper's

"[Immerwahr] writes in the manner of an entertaining and informative lecturer who cannot wait to tell the class his latest discovery from the archives . . . Gore Vidal was fond of referring to Imperial America, and not in an approving way. Were he alive to read this book he would probably endorse it, perhaps only regretting that he had not written it himself." —James Michael, Times Literary Supplement

"How to Hide an Empire takes you on a whirlwind tour of the islands and territories the U.S. has governed from the 19th century on. It draws you in with smartly weaved, gripping stories and constructs an impressively expansive tale of America’s global conquests. Manifest destiny takes on a whole new meaning. Simmering beneath all these stories is a powerful throughline: As classic colonialism was being fazed out in the 20th century, a new, more covert form of empire-building set in – with the U.S. at the forefront. It’s not a stretch to say that this book will make you think about American history in a new way." —Ramtin Arablouei, NPR

"There are many histories of American expansionism. How to Hide an Empire renders them all obsolete. It is brilliantly conceived, utterly original, and immensely entertaining — simultaneously vivid, sardonic and deadly serious." —Andrew J. Bacevich, author of Twilight of the American Century

"How to Hide an Empire is a breakthrough, for both Daniel Immerwahr and our collective understanding of America’s role in the world. His narrative of the rise of our colonial empire outside North America, and then our surprising pivot from colonization to globalization after World War II, is enthralling in the telling — and troubling for anyone pondering our nation’s past and future. The result is a book for citizens and scholars alike." —Samuel Moyn, author of Not Enough: Human Rights in an Unequal Age

"This book changes our understanding of the fundamental character of the United States as a presence in world history. By focusing on the processes by which Americans acquired, controlled, and were affected by territory, Daniel Immerwahr shows that the United States was not just another 'empire,' but was a highly distinctive one the dimensions of which have been largely ignored." —David A. Hollinger, author of Protestants Abroad: How Missionaries Tried to Change the World but Changed America

“Historian Immerwahr argues in this substantial work that . . . for more than two centuries the U.S. has been . . . a kind of empire . . . made up of territories . . . barely acknowledged in popular conceptions of the country . . . This insightful, excellent book, with its new perspective on an element of American history that is almost totally excluded from mainstream education and knowledge, should be required reading for those on the mainland." —Publishers Weekly (Starred Review)

"President Jefferson imagined an 'Empire of Liberty' . . . [but] Immerwahr illustrates how American territorial expansion included control over and governance of millions of Spanish speakers and various Indian tribes who had to be forcefully subdued . . . a useful and informative work, since many of these overseas territories remain under our governance." —Booklist

"In How to Hide an Empire, Immerwahr chronicles the history of . . . ‘large colonies and pinprick islands’. The result is a whimsical-serious work: a deft disquisition on America, and America in the world, with a raconteur’s touch and keen sense of the absurd." —Stephen Phillips, The Spectator

"Immerwahr peppers his account with colourful characters and enjoyable anecdotes. This tale of territorial empire, he suggests, throws light on the histories of everything from the Beatles to Godzilla, the birth-control pill to the transistor radio." —The Economist