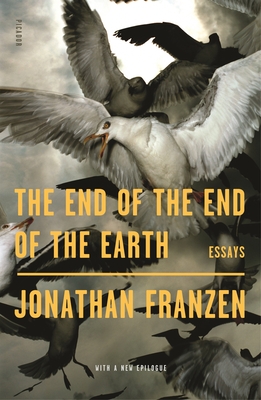 “Exacting and meticulous, Franzen’sThe End of the End of the Earth reports on the state of the environment from Africa to Antarctica and relentlessly questions his role as a privileged Westerner in a world of vast inequality. Above all, he puts everything in the context of climate change. Using birds as his moral compass, Franzen evokes the deep joy they bring when he sees them in the wild and delivers heartbreaking accounts of ruined habitats, wanton slaughter of songbirds, and the devastating toll of industrial fishing on seabirds. No less tragic are the stories of impoverished people who live among these birds, and Franzen continually questions the ethics of worrying about avian suffering in the midst of so much human suffering. Ultimately as hopeful as it is anguished, Franzen’s book takes biodiversity as its guiding principle: there’s no one way to save the world, just as there’s no single set of rules governing how to live in it.”
— Laurie Greer, Politics and Prose Bookstore, Washington, DC

The essayist, Jonathan Franzen writes, is like “a fire-fighter, whose job, while everyone else is fleeing the flames of shame, is to run straight into them.” For the past twenty-five years, even as his novels have earned him worldwide acclaim, Franzen has led a second life as a risk-taking essayist. Now, at a moment when technology has inflamed tribal hatreds and the planet is beset by unnatural calamities, he is back with a new collection of essays that recall us to more humane ways of being in the world.

Franzen’s great loves are literature and birds, and The End of the End of the Earth is a passionate argument for both. Where the new media tend to confirm one’s prejudices, he writes, literature “invites you to ask whether you might be somewhat wrong, maybe even entirely wrong, and to imagine why someone else might hate you.” Whatever his subject, Franzen’s essays are always skeptical of received opinion, steeped in irony, and frank about his own failings. He’s frank about birds, too (they kill “everything imaginable”), but his reporting and reflections on them—on seabirds in New Zealand, warblers in East Africa, penguins in Antarctica—are both a moving celebration of their beauty and resilience and a call to action to save what we love.

Jonathan Franzen is the author of five novels, including The Corrections, Freedom, and Crossroads, and five works of nonfiction, most recently Farther Away and The End of the End of the Earth, all published by Farrar, Straus and Giroux. He lives in Santa Cruz, California.

"The work of a writer at the top of his game–limber and lovely, delivering deep insights with delicacy and grace." —Sarah Crown, The Guardian

"Franzen, unlike many, listens. It’s what makes him one of the best living writers of fictional dialogue, and it’s what makes his arguments productively provocative." —Charles Arrowsmith, The Washington Post

"[Franzen's] turning over rocks along the shore and finding noteworthy details beneath." —Bill McKibben, The New York Times Book Review

"If, as F. Scott Fitzgerald wrote, the “test of a first-rate intelligence is the ability to hold two opposing ideas in the mind at the same time, and still retain the ability to function”, then Franzen has passed with flying colours." —Andrew Gallix, The Irish Times

"The End of the End of the Earth feels carefully crafted around a central concern: 'How do we find meaning in our actions when the world seems to be coming to an end?' . . . Franzen proves himself up to the challenge of the essay as a form, as 'something hazarded, not definitive, not authoritative,' and of a subject so vast and important that it affects us all. Ignore the tweets, read the book." —Carl Wilkinson, Financial Times