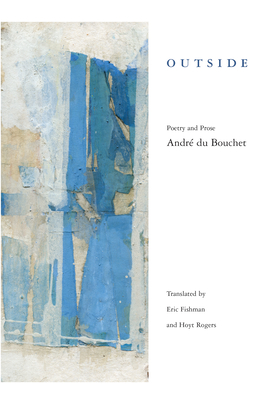 Poetry. Translated by Eric Fishman and Hoyt Rogers. For English-speaking readers, the pieces in OUTSIDE expand the access to du Bouchet offered by Openwork, the selection published by Paul Auster and Hoyt Rogers in 2014; deliberately, none of those texts is repeated here. Like ?the earlier volume, OUTSIDE affords a cross-section of du Bouchet's vast and highly varied work: from the dreamlike landscapes of his youthful poems to the mineral shards of his later compositions, which waver between poetry and prose. Even more than Openwork, OUTSIDE places a particular emphasis on the lyrical fragments from du Bouchet's notebooks. All the texts in this new collection follow the chronological order of their original publication--or in the case of the notebook entries, their date of composition--and all have been rendered into English for the first time. Du Bouchet's oeuvre is immense, and much of it still remains untranslated.--Eric Fishman from his introduction

In a typically taut yet open-ended design--as much visual as verbal--du Bouchet draws together the principal threads of his lifelong quest for truth, no matter how daunting that truth may be. The paradox of poetry is that unless it ceases to speak, the fecund silence toward which it tends cannot enter into play: the poet cannot go 'outside without having stopped it.' What he was seeking reemerges as the world itself, the crushing 'avalanche of air' that takes his breath away. He hangs up his vain attempt to approach it like a hollow pelt; ?language, which seemed so 'rapid, ' is now the 'motionless animal of words.' The poem is always a betrayal of nature, a kind of taxidermy. But innate to the ceaseless hunt for meaning is the wildness that escapes us. Killing the vital language we love, freezing it into the trophies we call poems, we arrive at an inkling of what awaits us beyond them. We have gained what far surpasses any Romantic reverie: reality itself.--Hoyt Rogers from the afterword.