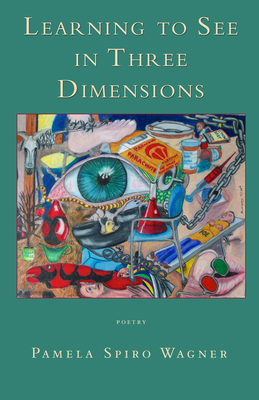 In her second collection of poetry, Learning to See in Three Dimensions, Pamela Spiro Wagner takes us deep into an exploration of the human condition by delving into the worlds of relationships, religion, nature, and mental health. In each poem—and through each intense piece of original artwork included in the book—we are led up to a line and dared to cross it into a new paradigm of understanding the world. In “Mosaic” we are challenged to understand “assembling beauty from broken things”; in “State Property” we are led to consider how with “one aching brick at a time, / some walls are built, others are torn down…”; in “Friday Night Vigil” we must reconcile “How lovely the world is, although it’s dying.” Just as powerful and original as Wagner’s insights is her description: “like the poplar / still spilling her yellow dress / to the insistent fingertips of fall” in “When I Lose You” and in “Afterwards, What the Mother Said,” in which Wagner writes of the mother of a jihadist martyr, “But had I known of his plans / I would have taken a blade, sliced open my heart and crammed him deep inside. // I would have seamed it tight to seal him in. / I would have never let him go.” In this rich, full collection, Wagner’s poetry pulls us into new territory through her alternating playfulness, hope, and, especially in the superb section Poems In Which I Speak Frankly, courage, a courage from which we all have much to learn.

Pamela Spiro Wagner is an award-winning writer, artist and poet. In 2001/2, she shared a First Place in the BBC World Service Meridian Writings International Poetry Competition, judged by Nobelist Wole Soyinke, for her poem “The Prayers of the Mathemetician.” With  her twin sister, a psychiatrist, Wagner co-authored the popular memoir, Divided Minds: Twin Sisters and their Journey through Schizophrenia (St Martin’s Press, 2005), which won the national NAMI Outstanding Literature Award and was a finalist for the Connecticut Book Award. Her first book of poems, We Mad Climb Shaky Ladders, published by Cavankerry Press in 2009, was a finalist for Poetry Book of the Year in Foreword Reviews magazine. Wagner is also an entirely self-taught artist who started making art, and doing it nearly non-stop, in 2008, after the “miracle of a small brain bleed. Two of her life-size papier mache sculptures are on permanent exhibit at the Norwich, Connecticut Otis Library. Her unusual but highly skilled drawings have appeared with accompanying poems in the new magazine, Collective DreamArts. Wagner currently resides Brattleboro, Vermont.