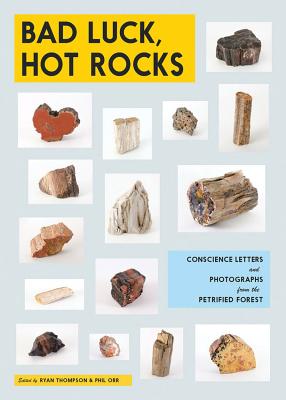 Such a great, weird book for a great, weird project. Apparently, when you steal rocks from the Petrified Forest National Park in Arizona, you inevitably feel terrible about it and citing bad luck brought on by the theft, you return the stolen rocks to their source, along with an accompanying letter of apology. Ryan Thompson and Phil Orr beautifully documented both the letters from the park's "conscience letter archive" as well as photographed some of the gorgeous returned rocks from the "conscience pile" for this curious volume. Wonderful.  -sm

The Petrified Forest National Park in Northeast Arizona protects one of the largest deposits of petrified wood in the world. Despite stern warnings, visitors remove several tons of petrified wood from the park each year, often returning these rocks by mail (sometimes years later), accompanied by a "conscience letter." These letters often include stories of misfortune attributed directly to their theft: car troubles, cats with cancer, deaths of family members, etc. Some writers hope that by returning these stolen rocks, good fortune will return to their lives, while others simply apologize or ask forgiveness. "They are beautiful," reads one letter, "but I can't enjoy them. They weigh like a ton of bricks on my conscience. Sorry...." Bad Luck, Hot Rocks documents this ongoing phenomenon, combining a series of original photographs of these otherworldly "bad luck rocks" with facsimiles of intimate, oddly entertaining letters from the park's archives.