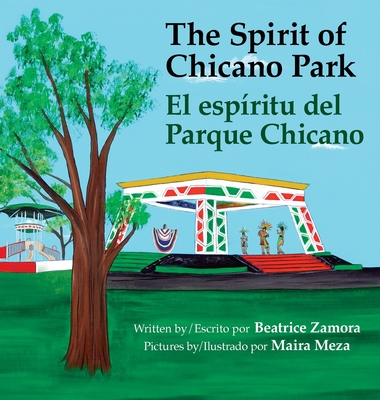 By Beatrice Zamora, Meza Maira (Illustrator)
$19.99
On Our Shelves Now

Join Bettie and Bonky as they discover a magical park located in the most peculiar place, under a bridge They learn to love their new home in Barrio Logan, a neighborhood with a rich history in San Diego, California. Through the eyes of a mystical se ora they travel through a historical journey of a community's struggle to build a park.

The Spirit of Chicano Park/El espiritu del parque Chicano is a bilingual, children's picture book that depicts the history of the creation of a historic park located in the community of Logan Heights in San Diego, California. The park was founded in 1970 as a result of a community Take Over of the land. The park was born out of a community's struggle to create a place for family gatherings amidst the destruction of their community through the enforcement of eminent domain and the building of Interstate 5 freeway and the Coronado Bridge. The park is located underneath the Coronado Bridge. Massive cement pillars support the bridge and fill the park's landscape. Community artists painted murals on the pillars that depict the history of the park and the history of the Chicano community. Housed in the center of the park is a one-of-a-kind stage called a Kiosco. The park is a living legacy of the people of Logan Heights, now also known as Barrio Logan. It is a vibrant park with community activities, dance ceremonials, and political gatherings occurring on a regular basis. Chicano Park is known nationally and internationally because of its art, but also because it became a symbol of hope and self-determination for the Chicano/Mexican-American community throughout the United States. The park was designated as a Historical Landmark in 2016.

The book is a full color, historical fiction and magical realism, children's book written in English and Spanish. The back pages of the book showcase profiles of community organizers, artists, dancers, musicians, low-riders, and other activists who have been instrumental to the park's development.