A Conservative and Compassionate Approach to Immigration Reform: Perspectives from a Former US Attorney General (American Liberty and Justice) (Hardcover) 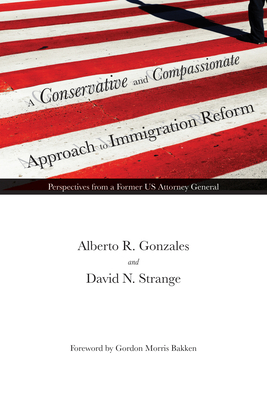 A thorough exploration of and compassionate solutions to current U.S. immigration policy

Although the United States is a nation founded by immigrants, Alberto Gonzales and David Strange believe that national immigration policy and enforcement over the past thirty years has been inadequate. This failure by federal leaders has resulted in a widespread introduction of state immigration laws across the country. Gonzales and Strange assert that the solution to current immigration challenges is reform of federal immigration laws, including common sense border control, tougher workplace enforcement, minor (but significant) changes to the Immigration and Nationality Act, and a revised visa process that discourages overstaying the duration of a visa.
Gonzales and Strange embrace many provisions of current pending legislation, but are sharply critical of others. Their proposals call for an expansion of the grounds of inadmissibility to foster greater respect of law and to address the problem of visa overstays, while also calling for a restriction on grounds of inadmissibility in other areas to address the large undocumented population and increasing humanitarian crisis. They explore nationality versus citizenship and introduce a pathway to nationality as an alternative to a pathway to citizenship.
This immigration policy blueprint examines the political landscape in Washington and makes the argument that progress will require compromise and the discipline to act with compassion and respect. Most significantly, it illuminates how following this blueprint can enhance national security and improve the economy in the United States in ways that is consistent with the rule of law.

Alberto R. Gonzales is former counsel to the President and United States Attorney General under the George W. Bush administration. He is currently the Dean of the Belmont University College of Law, where he holds the Doyle Rogers Distinguished Chair of Law.

David N. Strange is a managing partner at the law firm of Whittenburg Strange & Walker, P.C. He is also an adjunct professor of law at the Texas Tech University School of Law.

This is a book that conservatives and liberals will find compelling in its arguments and the depth of careful, comprehensive research. Yet the issues are so divisive that advocates for change will be taking copious notes from the text and sources. The authors have crafted arguments so skillfully that politicians of every stripe must deal with the implications for revision of the statutes.
—Gordon Morris Bakken, from the foreword

A well-written and grounded challenge to anyone – politician or pundit – who has a sincere desire to see a comprehensive reform to American immigration laws. Devoid of the invective and hyperbole that too frequently accompany discussion of this topic, Gonzales’s and Strange’s proposals have something that everyone will applaud and something with which everyone will take issue. This is a book that every member of Congress should read and respond to. I am glad that someone with Gonzales’s perspective has added to this very necessary discussion.
--Keith M. Harrison, University of New Hampshire School of Law