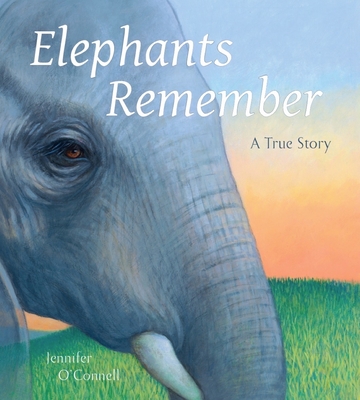 The deep bond between Lawrence Anthony and the traumatized matriarch of the wild elephant herd he saved is at the heart of this story.

From the author-illustrator of The Eye of the Whale (Tilbury House, 2013), this nonfiction picture book tells the story of Lawrence Anthony and the deep bond he forged with the matriarch of the herd he saved at his animal reserve in South Africa. When Lawrence died, the matriarch led all the elephants from remote parts of the reserve in a procession to his home, where they gathered to mourn him. They returned on the same day at the same time for the next two years -- because elephants remember. This moving story of human-elephant mutual love and respect will inspire readers of all ages.

Jennifer O’Connell is the author and illustrator of the New York Times bestseller Ten Timid Ghosts, which has sold over a million copies. Her picture book The Eye of the Whale — like Elephants Remember, a true story of the sentient animals with whom we share this planet—received the 2014 Green Earth Book Award, a Moonbeam Gold Award, and was on RIF’s STEAM Multicultural Booklist. Jennifer is a two-time recipient of the Christopher Award for her book illustrations and is known for her engaging and interactive school presentations, workshops, and virtual programs. See more at JenniferOConnellArt.com.

STARRED REVIEW: At Thula Thula, a wild-animal reserve in Zululand, Lawrence Anthony received an urgent call from a fellow conservationist. Attacked by poachers, a herd of frightened elephants had broken out of their enclosure, and the matriarch and her calf were killed. Anthony agreed to give the herd a new home, but when they arrived by truck, the elephants were understandably distraught.The first night, they broke down an electric fence and escaped. Shot with tranquilizer darts, they were brought back. Anthony tried to gain the trust of Nana, the new matriarch. The next night,when they prepared to escape again, he talked with her. The herd stayed, and Thula Thula became their home. Anthony and Nana became friends. After he died suddenly, she inexplicably led the herd across the reserve for miles. The elephants stood near his house, "rumbling quietly."O'Connell notes that elephants “mourn the deaths of family members.” Based on Anthony’s The Elephant Whisperer (2009), this picture book offers insights into elephants and underscores the necessity of protecting them. Using color and lighting effectively, O’Connell’s acrylic paintings help viewers imagine the unfamiliar settings. Her touching story awakens a sense of wonder about elephants as well as curiosity about how they experience the world.

A look at the friendship between a conservationist and the elephant herd he rescues.When the elephants need to be relocated as a result of their destructive wanderings, Lawrence Anthony knows that if he does not take the herd to Thula Thula, his animal reserve in Zululand, South Africa, the animals risk being killed by poachers. Two elephants—the matriarch and her calf—were killed during their capture, and Lawrence struggles to gain the animals’ trust and ensure their safety and well-being. Slowly, he succeeds, and his initially uneasy relationship with new matriarch Nana develops into a lasting bond; even after Lawrence tries to distance himself from the elephants, granting them their independence, the elephants never forget him, and on his death, they come to his house, seemingly to mourn him. This is a compelling true story that will leave readers on the edges of their seats. O’Connell’s text is supplemented with backmatter that includes information, in question-and-answer format, about elephants, Lawrence Anthony, and Thula Thula as well as an author’s note and a list of additional resources. Acrylic illustrations capture Nana’s anger and mistrust of humans and Lawrence’s patience with the herd. Librarians and educators should prepare for a rush of elephant-related questions once this book hits the shelves, and caregivers may find themselves equally fascinated by this heartbreaking story of trust, survival, and loss.