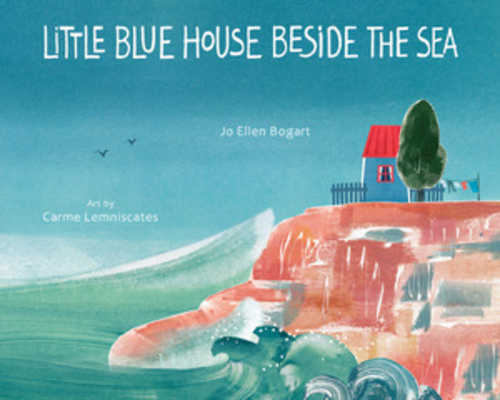 The little blue house in this lovely, lyrical book could be overlooking any ocean, and the narrator could be any child anywhere, gazing out over the waters, thinking about all the places she could go and imagining other little blue houses on other shores, with other children gazing back.

What child doesn’t love walking in the surf, feeling the water steal the sand from beneath her toes as a wave retreats? Who doesn’t love the salty smell of the air and the sight of ships far out on the horizon? What happens in the oceans is critically important to life on Earth. That’s why the girl in her little blue house wants to believe that the children gazing back from far over the horizon love the oceans as she does and wants to keep them safe, alive, and beautiful.

Jo Ellen Bogart (Guelph, Ontario) has written 20 books for young readers, including The White Cat and the Monk, which was named a Best Poetry Book by the National Council of Teachers of English. Her bestselling books include Jeremiah Learns to Read, Daniel’s Dog, and Gifts, several of which have been included on Canadian Children’s Book Centre Our Choice lists.

Carme Lemniscates (Barcelona, Spain) is the author, illustrator, and designer of several critically acclaimed children’s books including Trees, Birds, the upcoming Seeds (Candlewick), and El jardín mágico (Ekaré), for which she won the 2017 SCBWI Crystal Kite Award. She has also illustrated I Am a Warrior Goddess, Kate Coombs’s BabyLit Little Poets board book series, and Hillary and Chelsea Clinton’s Grandma’s Gardens (Philomel). You can visit Carme at https://lemniscates.com.

A wee redhead in a matching knit vest and pom-pommed beanie observes the world around them, taking pleasure in the raging storms and sunny flowers, in this charming read-aloud with an underlying message about global connectivity and environmental awareness. Rhyming couplets tell the tale of a well-loved seaside cottage on a rocky northern shore; whales and puffins are rendered in unique monotype textures against sweeping mixed media landscapes to capture the wild seasons and changing weather. -STARRED REVIEW
— PALLAS GATES MCCORQUODALE - Foreword Reviews

PreS-1–Who wouldn’t want to live in a cozy house beside the sea? Through singsong rhyme and vivid imagery that invoke the senses, Bogart and Lemniscates have created a captivating tale of a young girl and the natural beauty that exists just outside of her home by the sea. She watches the boats go sailing by and sees fishermen and puffins keep busy trying to catch fish. Delightful images of humpback whales at play are followed by the light of the moon and the lighthouse towers being reflected in the big blue sea. Lemniscates brings readers into the young girl’s world with vibrant colors, subtle nods to finger painting, and earthy tones that will beguile readers of all ages. VERDICT A fantastic addition to any children’s library. -STARRED REVIEW

In a world where travel has now become difficult, transport your child to the ocean with the critically acclaimed creative team who, individually, are behind several best-selling titles.  Although it is a simple story that follows a little girl across the shore and through a storm, the book carries a deeper meaning.

The little blue house could be overlooking any ocean, and the narrator could be any child anywhere, gazing out over the waters, thinking about all the places s/he could go and imagining other little blue houses on other shores, with other children gazing back. Now more than ever, this message of unity is so important. We should be teaching our children to make connections with those from different backgrounds as at the end of the day, we all share the great, wide, wonderful world.

At the back of the book, in ‘A Note from Jo Ellen’, this message is conveyed beautifully through a personal childhood anecdote and a plea that we look after the oceans that serve us so well.

Overall, I can envision the lyrical Little Blue House Beside the Sea next to the likes of The Storm Whale by Benji Davies and for those curious to what lives in the sea, The Big Book of the Blue by Yuval Zommer.

A little girl tells of walking home to her “little blue house beside the sea.” Every day, she ambles along the cliff path, looking out at the boats and observing nature all around her: the tall grasses waving, the puffins waddling on the hills, and the whales playing in the ocean. At night, the moon rises, creating a glistening path on the water, and sometimes the lighthouse flashes its warning to ships. When a storm is brewing, the girl hurries to shelter in her tiny house. As the simply written, rhyming text says, “There is no place so dear to me / as that little blue house beside the sea.” In a note, Bogart recalls enjoying the Gulf of Mexico as a child and, as an adult, looking out over the North Atlantic from Newfoundland, the book’s setting. Using monotype, watercolor,acrylic, and digital elements, the mixed-media collage artwork offers scenes with strong lines,distinctive shapes, and some striking color combinations. An effective portrayal of a child’s connection to both her home and the sea.
— Carolyn Phelan - Booklist

A solitary child rejoices in the special beauty of a seaside home.

Simple rhyming couplets and colorful, textured collages make this book evocative and charming, even for children who may not be familiar with the ocean. This young child seems to live independently in the titular house; while improbable, this is a fantasy that many readers will find appealing. In a final note, the author describes her connection with Newfoundland, where the little blue house of the title is located, and her fascination with the idea that the endless ocean could connect friends “who love the ocean as I do, and want to keep it safe, alive, and beautiful.” A reassuringly fresh and simple take on nature in a complex world.