United States of Distraction: Media Manipulation in Post-Truth America (and What We Can Do about It) (City Lights Open Media) (Paperback) 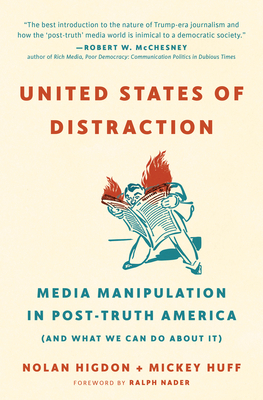 By Mickey Huff, Nolan Higdon, Ralph Nader (Foreword by)
$16.95
Out of stock. Available to order.

A powerful critique of how manipulation of media gives rise to disinformation, intolerance, and divisiveness, and what can be done to change direction.

"Mickey Huff and Nolan Higdon emphasize what we can do today to restore the power of facts, truth, and fair, inclusive journalism as tools for people to keep political and corporate power subordinate to the engaged citizenry and the common good."--Ralph Nader

The role of news media in a free society is to investigate, inform, and provide a crucial check on political power. But does it?

It's no secret that the goal of corporate-owned media is to increase the profits of the few, not to empower the many. As a result, people are increasingly immersed in an information system structured to reinforce their social biases and market to their buying preferences. Journalism's essential role has been drastically compromised, and Donald Trump's repeated claims of "fake news" and framing of the media as "an enemy of the people" have made a bad scenario worse.

Written in the spirit of resistance and hope, United States of Distraction offers a clear, concise appraisal of our current situation, and presents readers with action items for how to improve it.

Praise for United States of Distraction

"A war of distraction is underway, media is the weapon, and our minds are the battlefield. Higdon and Huff have written a brilliant book of how we've gotten to this point, and how to educate ourselves to fight back and win."--Henry A. Giroux, author of American Nightmare: Facing the Challenge of Fascism

"Higdon and Huff have produced the best short introduction to the nature of Trump-era journalism and how the 'Post-Truth' media world is inimical to a democratic society that I have seen. The book is provocative and an entertaining read. Best of all, the analysis in United States of Distraction leads to concrete and do-able recommendations for how we can rectify this deplorable situation."--Robert W. McChesney, author of Rich Media, Poor Democracy: Communication Politics in Dubious Times

"The U.S. wouldn't be able to hide its empire in plain sight were it not for the subservient 'free' press. United States of Distraction shows, in chilling detail, America's major media dysfunction--how the gutting of the fourth estate paved the road for fascism and what tools are critical to salvage our democracy."--Abby Martin, The Empire Files

"Nolan Higdon and Mickey Huff provides us with a fearless and dangerous text that refuses the post-truth proliferation of fake news, disinformation, and media that serve the interests of the few. This is a vital wake-up call for how the public can protect itself against manipulation and authoritarianism through education and public interest media."--George Yancy, author of Backlash: What Happens When We Talk Honestly about Racism in America and Professor of Philosophy at Emory University

Dr. Nolan Higdon is professor of History and Communication at California State University, East Bay. His academic work primarily focuses on news media, propaganda, critical media literacy, and social justice pedagogies. He has been a guest commentator for news media outlets such as The New York Times, San Francisco Chronicle, CBS, NBC, ABC, and Fox. He is a board member for the Media Freedom Foundation, frequent contributor to Project Censored's annual Censored books series, a co-founder of the Global Critical Media Literacy Project, a program advisor for Sacred Heart University Media Literacy and Digital Culture Graduate Program, a steering committee member for the Union for Democratic Communications, and co-host of the Project Censored radio show.Mickey Huff is director of Project Censored and the president of the Media Freedom Foundation. He has edited or coedited ten volumes of in the Censored book series and contributed numerous chapters to these annuals since 2008. He has also co-authored essays on media and propaganda for other scholarly publications. He is professor of social science and history at Diablo Valley College, where he co-chairs the History Department; he is also a lecturer in the Communications Department at California State University, East Bay, and has taught Sociology of Media at Sonoma State University. Huff is executive producer and cohost of The Project Censored Show, the weekly syndicated program that originates from KPFA in Berkeley. He is a cofounding member of the Global Critical Media Literacy Project (gcml.org), sits on the advisory board for the Media Literacy and Digital Culture graduate program at Sacred Heart University, and serves on the editorial board for the journal Secrecy and Society. Huff works with the national outreach committee of Banned Books Week, the American Library Association, and the National Coalition Against Censorship, of which Project Censored is a member. He is the critical media literacy consultant for the educational Internet startup, Tribeworthy.com, He regularly gives interviews on critical media literacy, propaganda, censorship issues, and contemporary historiography. He is a musician and composer and lives with his family in Northern California.