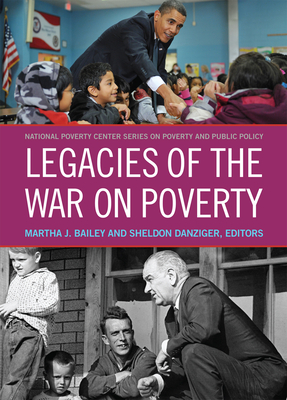 Many believe that the War on Poverty, launched by President Johnson in 1964, ended in failure. In 2010, the official poverty rate was 15 percent, almost as high as when the War on Poverty was declared. Historical and contemporary accounts often portray the War on Poverty as a costly experiment that created doubts about the ability of public policies to address complex social problems. Legacies of the War on Poverty, drawing from fifty years of empirical evidence, documents that this popular view is too negative. The volume offers a balanced assessment of the War on Poverty that highlights some remarkable policy successes and promises to shift the national conversation on poverty in America. Featuring contributions from leading poverty researchers, Legacies of the War on Poverty demonstrates that poverty and racial discrimination would likely have been much greater today if the War on Poverty had not been launched. Chloe Gibbs, Jens Ludwig, and Douglas Miller dispel the notion that the Head Start education program does not work. While its impact on children’s test scores fade, the program contributes to participants’ long-term educational achievement and, importantly, their earnings growth later in life. Elizabeth Cascio and Sarah Reber show that Title I legislation reduced the school funding gap between poorer and richer states and prompted Southern school districts to desegregate, increasing educational opportunity for African Americans. The volume also examines the significant consequences of income support, housing, and health care programs. Jane Waldfogel shows that without the era’s expansion of food stamps and other nutrition programs, the child poverty rate in 2010 would have been three percentage points higher. Kathleen McGarry examines the policies that contributed to a great success of the War on Poverty: the rapid decline in elderly poverty, which fell from 35 percent in 1959 to below 10 percent in 2010. Barbara Wolfe concludes that Medicaid and Community Health Centers contributed to large reductions in infant mortality and increased life expectancy. Katherine Swartz finds that Medicare and Medicaid increased access to health care among the elderly and reduced the risk that they could not afford care or that obtaining it would bankrupt them and their families. Legacies of the War on Poverty demonstrates that well-designed government programs can reduce poverty, racial discrimination, and material hardships. This insightful volume refutes pessimism about the effects of social policies and provides new lessons about what more can be done to improve the lives of the poor.

MARTHA J. BAILEY is associate professor in the Department of Economics at the University of Michigan and faculty research fellow at the National Bureau of Economic Research. SHELDON DANZIGER is the President of the Russell Sage Foundation. He was formerly the Henry J. Meyer Distinguished University Professor of Public Policy and director of the National Poverty Center at the Gerald R. Ford School of Public Policy at University of Michigan.