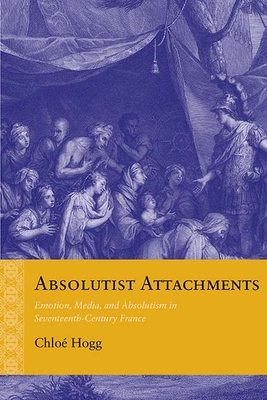 Louis XIV’s subjects explored new kinds of affective relations with their sovereign, joining with the king in acts of aesthetic judgment, tender feeling, or the “newsiness” of emerging print news culture. Such alternative modes of adhesion countered the hegemonic model of kingship upheld by divine right, reason of state, or corporate fidelities and privileges with subject-driven attachments and practices. Absolutist Attachments discovers absolutism’s alternative political and cultural legacy—not the spectacle of an unbound king but the binding connections of his subjects.

CHLOÉ HOGG is an assistant professor of French at the University of Pittsburgh.


“This is a timely, ambitious, and well-executed book project whose publication will reorient the way in which we look at the absolutist culture undergirding the reign of Louis XIV. It is compelling not only in the variety and depth of the archives it explores and the effortlessly merging of insights from very different sources, but also in the author’s lightly worn erudition and eloquent pen.” —Hall Bjørnstad, Indiana University

"This bold and theoretically lively work reopens the file on Louis XIV. Turning from the familiar model of the spectacular monarch, the dazzling readings of Absolutist Attachments detail instead the affective attachments between king and subjects. This poised, persuasive book will make waves in French studies, affect studies, and beyond." —Katherine Ibbett, author of Compassion’s Edge: Fellow-Feeling and its Limits in Early Modern France

"Across five eclectic chapters, Hogg investigates a wide array of 'media,' capaciously defined to embrace letters, essays, poems, engravings, and occasionally even paintings and monuments along with periodical publications. With this term, she emphasizes how literary and iconographic works mediate their public’s perceptions of the king and his actions. By using 'media' as an umbrella category, Hogg also ingeniously calls attention to the way that the expanding periodical press under Louis XIV altered its readers’ and viewers’ consumption of the representations of public affairs . . .  Hogg makes a compelling argument that the 'imbrication of emotion and information' may be seventeenth-century France’s most enduring legacy to current times." —Ellen R. Welch, H-France Forum

"Absolutist Attachments is a thought-provoking study that challenges our perceptions of Louis XIV’s rule in original ways. This well-written and highly documented study is an extremely pleasant read. Hogg bridges multiple fields of inquiry and examines diverse media such as paintings, memoirs, epistolary correspondence, literary texts, newspapers, treatises, and historical archives. Hogg not only excels in literary close reading, but she also guides the reader through the contemplation of a painting by Le Brun, and the architecture of the Porte Saint-Martin. Her study moves seamlessly from the visual arts to literature with an ease that any humanities scholar should envy. Such dexterity in using the sources makes her book fascinating, inspiring, and bold in ways that foster discussion." —Jennifer Tama, H-France Forum

"Hogg begins and ends her book with a simple and clever idea that resonates with a readership acquainted with social media. Just as today one can feel an emotional attachment to the leader of one’s by following her/him on Twitter and/or friends on Facebook, seventeenth-century subjects developed close connections to Louis XIV through various media, among them the emerging periodic press. Disputing, or rather nuancing, the common idea that the absolutist power of the longest-reigning European monarch was based on a vertical mode of connection and hegemonic power best exemplified by the palace of Versailles, Absolutist Attachments convincingly demonstrates the many ways people could feel horizontally connected to their king. Ambitious in scope and rich in detail, this book combines vast erudition and strength in depth across several areas of studies—art history, history, French studies, media studies, disability studies, and affect studies. Thus, Hogg’s monograph deploys five substantial chapters to reveal the vectors of affectivity and media connectivity (or disconnections) between Louis XIV and his subjects— mainly the nobility—and to explore new ways of political adhesion." —Hélène Visentin, H-France Forum