The Wretched of the Earth (Paperback) 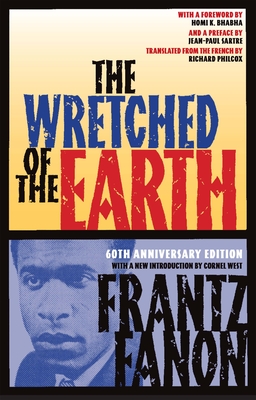 First published in 1961, and reissued in this sixtieth anniversary edition with a powerful new introduction by Cornel West, Frantz Fanon's The Wretched of the Earth is a masterfuland timeless interrogation of race, colonialism, psychological trauma, and revolutionary struggle, and a continuing influence on movements from Black Lives Matter to decolonization. A landmark text for revolutionaries and activists, The Wretched of the Earth is an eternal touchstone for civil rights, anti-colonialism, psychiatric studies, and Black consciousness movements around the world. Alongside Cornel West's introduction, the book features critical essays by Jean-Paul Sartre and Homi K. Bhabha. This sixtieth anniversary edition of Fanon's most famous text stands proudly alongside such pillars of anti-colonialism and anti-racism as Edward Said's Orientalism and The Autobiography of Malcolm X.

Frantz Fanon was born in Martinique in 1925. He served in the French Army during World War II, and later studied medicine and psychiatry in France, where he published his first book, Black Skin, White Masks in 1952. He joined the Algerian Nationalist Movement in the mid-1950s, and published The Wretched of the Earth shortly before dying of leukemia in December 1961.