Delivering on Digital: The Innovators and Technologies That Are Transforming Government (Hardcover) 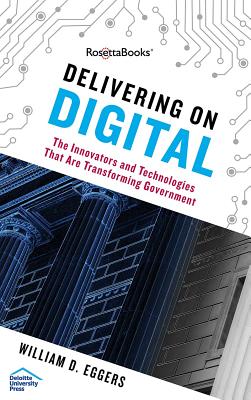 What if you could file your taxes or open a business online in mere minutes? It's already possible in Estonia. So why are some US government agencies still running software from the 1960s with no upgrades in sight?

When HealthCare.gov went live in October 2013, many called the website a catastrophe. For the U.S. Federal government, however, the launch ultimately proved pivotal: it underscored the necessity of digital excellence in public institutions and inspired hundreds of the tech industry's best and brightest to come to Washington with the singular mission to modernize government.

So how do you take a government built on analog, industrial-era frameworks and redesign it as a fully digital state? We must imagine a new kind of government.

Imagine prison systems that use digital technology to return nonviolent offenders promptly and securely into society. Imagine a veterans health care system built around delivering a personalized customer experience for every Vet. We now have the digital tools (cloud computing, mobile devices, analytics) and the talent to stage a real transformation. This book provides the handbook to make it happen.

William D. Eggers, author of nine books and a leading authority on government reform, knows how we can use tech-savvy teams, strong leadership, and innovative practices to reduce the risks and truly achieve a digitally transformed government.

William D. Eggers is the executive director of Deloitte's Center for Government Innovation. His new book is Delivering on Digital: The Innovators and Technologies that are Transforming Government. His eight other books include The Solution Revolution: How Government, Business, and Social Enterprises are Teaming up to Solve Society's Biggest Problems (Harvard Business Review Press 2013). The book, which The Wall Street Journal calls "pulsating with new ideas about civic and business and philanthropic engagement," was named to ten best books of the year lists. His other books include The Washington Post best seller If We Can Put a Man on the Moon: Getting Big Things Done in Government (Harvard Business Press, 2009), Governing by Network (Brookings, 2004), and The Public Innovator's Playbook (Deloitte Research 2009). He coined the term Government 2.0 in a book by the same name. His commentary has appeared in dozens of major media outlets including the New York Times, Wall Street Journal, and the Chicago Tribune. He can be reached at on twitter @wdeggers.