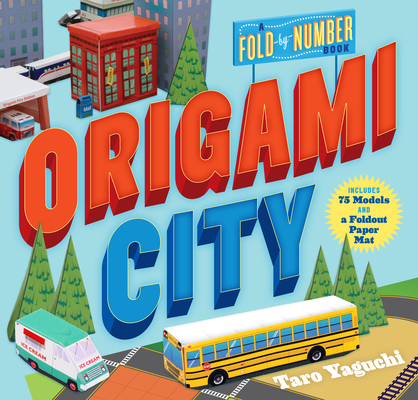 Fold it. Design it. Play with it. This amazing origami city, with 75 fold-by-number origami models, is yours!

Do you want an ice-cream shop right next to school? Or a limo waiting outside your driveway, ready to take you anywhere? Go for it!

Created by certified origami genius, Taro Yaguchi––who has not only mastered the ancient Japanese art of paper folding, but now introduces his own innovation called Fold-by-Number––Origami City will have you building every part of a paper-folded city: an eleven-story apartment building, a town airport complete with a plane, cars, a train, an ice cream truck, trees, cats, dogs, a rabbit, and even little chipmunks that play in the park. And you’re in charge. It’s like being an architect, an engineer, a builder, an urban planner, and a mayor all in one.

The kit includes 75 models to fold (with step-by-step instructions), 104 sheets of specially printed origami paper with numbers and lines for folding, and a full-color foldout play mat with roads and more.

Taro Yaguchi is the founder of Taro's Origami Studio. By profession, he is a Japanese patent attorney who holds offices in Tokyo, Osaka, and Philadelphia. Like all Japanese children, Taro grew up making origami at a young age, but it wasn't until he was a grown man that origami became his passion. His initial design was a paper airplane that contained his firm's information on one side and a plane design on the other. This proved so popular that he started experimenting with new folds on the long transpacific flights his business requires. Now Taro's Origami Studio has dozens of original designs ranging from cars and trucks to animals to buildings, and has partnered with companies and brands like Nickelodeon, Chase, ABC, Lord & Taylor, and Uniqlo, among others.