Nothing Like It In the World: The Men Who Built the Transcontinental Railroad 1863-1869 (Paperback) 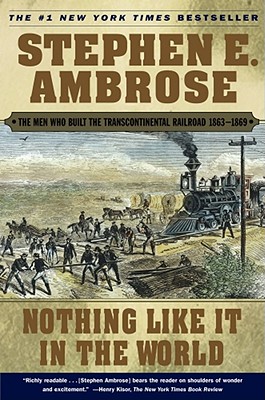 In this New York Times bestseller, Stephen Ambrose brings to life the story of the building of the transcontinental railroad, from the men who financed it to the engineers and surveyors who risked their lives to the workers who signed on for the dangerous job.

Nothing Like It in the World gives the account of an unprecedented feat of engineering, vision, and courage. It is the story of the men who built the transcontinental railroad—the investors who risked their businesses and money; the enlightened politicians who understood its importance; the engineers and surveyors who risked, and sometimes lost, their lives; and the Irish and Chinese immigrants, the defeated Confederate soldiers, and the other laborers who did the backbreaking and dangerous work on the tracks.

The U.S. government pitted two companies—the Union Pacific and the Central Pacific Railroads—against each other in a race for funding, encouraging speed over caution. Locomotives, rails, and spikes were shipped from the East through Panama or around South America to the West or lugged across the country to the Plains. In Ambrose's hands, this enterprise, with its huge expenditure of brainpower, muscle, and sweat, comes vibrantly to life.

Stephen E. Ambrose was a renowned historian and acclaimed author of more than thirty books. Among his New York Times bestsellers are Nothing Like It in the World, Citizen Soldiers, Band of Brothers, D-Day - June 6, 1944, and Undaunted Courage. Dr. Ambrose was a retired Boyd Professor of History at the University of New Orleans and a contributing editor for the Quarterly Journal of Military History.

This magnificent tale of high finance, low finagling, and workers hacking through 2,000 miles is magnificently told.
— Time, naming Nothing Like It in the World as the #1 Nonfiction Book of the Year

Stephen Ambrose has done it again....Ambrose should be read as much for his muscular prose and talent to get at the heart of the matter as for his research.
— Bob Minzesheimer, USA Today Historian