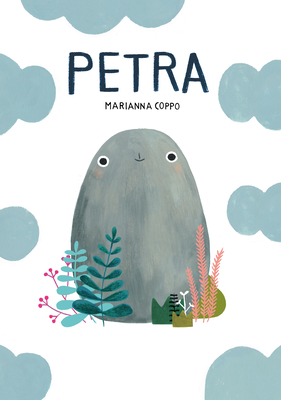 The humorous adventures of an irresistible little rock who finds herself in constantly changing circumstances, this stylish board book celebrates the power of believing in yourself.

Petra is a little rock who believes she is a mighty mountain . . . until a dog fetches her for its owner, and she is tossed into a bird's nest. A mountain? No, Petra is now an egg! An egg of the world in a world of possibility. Until she's flung into a pond, and becomes an amazing island . . . and, eventually, a little girl's pet rock. What will she be tomorrow? Who knows? But she's a rock, and this is how she rolls!

MARIANNA COPPO is an author/illustrator from Italy. She studied editorial illustration at MiMaster in Milan, and now focuses on freelance illustration in Rome. She is one of the curators of Tentacoli, an independent label which specializes in fanzines and handmade products. Her debut picture book, Petra, was released to great acclaim, and received three starred reviews from prominent publications. A Very Late Story is her latest book.

"[S]imple, smooth, and stylish… Change may be the only constant in Petra’s peripatetic existence, but her bubbly optimism is as solid as a Gibraltar." --Starred Review, Publisher's Weekly