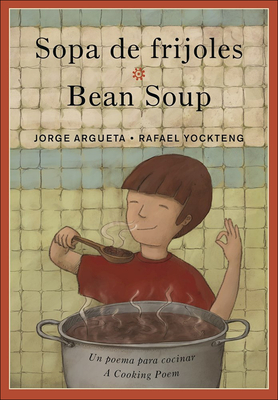 By Jorge Argueta, Rafael Yockteng (Illustrator)
Email or call for price.
Out of Print

This delightful recipe in poem form shows us all, young and old, how to make a heartwarming, tummy-filling bean soup from gathering the beans, onions and garlic to letting them swim in the pot until the house smells wonderful and it's time for supper.
A young boy helps his mother prepare a soup the whole family will enjoy using ingredients from Mother Earth. Onions are yellow as the dawn, beans are like stars spread out on the sky of the table and the water in the pot is as deep as a little lake. While the soup is cooking, the boy buries the cooking scraps under a tree in the yard so Mother Earth keeps on growing flavors.
Simply written, yet full of vivid imagery, Jorge Argueta's verse and Rafael Yockteng's animated illustrations make preparing bean soup a fun, almost magical experience. This book is a great family recipe/poem for those who already love bean soup it is a comfort food for many and for those who are looking for a delicious new healthy food.