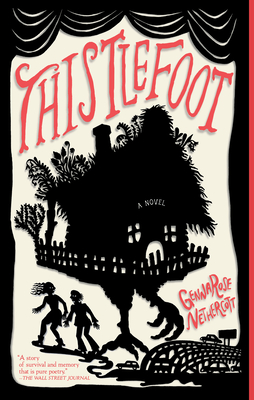 In the tradition of modern fairy tales like Neil Gaiman's American Gods and Naomi Novik's Spinning Silver comes an immersive fantasy saga, a debut novel about estranged siblings who are reunited after receiving a mysterious inheritance.

“A wonderfully imaginative, wholly enchanting novel of witness, survival, memory, and family that reads like a fairy tale godfathered by Neil Gaiman and Tim Burton in a wild America alive with wonders and devils alike. Thistlefoot shimmers with magic and mayhem and a thrilling emotional momentum.” —Libba Bray, bestselling author of The Diviners

The Yaga siblings—Bellatine, a young woodworker, and Isaac, a wayfaring street performer and con artist—have been estranged since childhood, separated both by resentment and by wide miles of American highway. But when they learn that they are to receive an inheritance, the siblings agree to meet—only to discover that their bequest isn’t land or money, but something far stranger: a sentient house on chicken legs.

Thistlefoot, as the house is called, has arrived from the Yagas’ ancestral home outside Kyiv—but not alone. A sinister figure known only as the Longshadow Man has tracked it to American shores, bearing with him violent secrets from the past: fiery memories that have hidden in Isaac and Bellatine’s blood for generations. As the Yaga siblings embark with Thistlefoot on a final cross-country tour of their family’s traveling theater show, the Longshadow Man follows in relentless pursuit, seeding destruction in his wake. Ultimately, time, magic, and legacy must collide—erupting in a powerful conflagration to determine who gets to remember the past and craft a new future.

An enchanted adventure illuminated by Jewish myth and adorned with lyrical prose as tantalizing and sweet as briar berries, Thistlefoot is a sweeping epic rich in Eastern European folklore: a powerful and poignant exploration of healing from multi-generational trauma told by a bold new talent.

GENNAROSE NETHERCOTT is a writer and folklorist. Her first book, The Lumberjack’s Dove, was selected by Louise Glück as a winner of the National Poetry Series, and whether authoring novels, poems, ballads, or even fold-up paper cootie catchers, her projects are all rooted in myth—and what our stories reveal about who we are. She tours nationally and internationally performing strange tales (sometimes with puppets in tow) and composing poems-to-order for strangers on an antique typewriter with her team, the Traveling Poetry Emporium. She lives in the woodlands of Vermont, beside an old cemetery. Thistlefoot is her debut novel.

ONE OF THE BEST BOOKS OF THE YEAR: NPR • The Wall Street Journal • Washington Independent Review of Books • BookPage • Book Riot

ONE OF THE MOST ANTICIPATED BOOKS OF THE YEAR: Tor • Paste • Business Insider • BuzzFeed • Library Journal • Literary Hub • Debutiful

“Steeped in the ancient tropes of folk tales and animated by a passionate belief in the vital role of storytelling, GennaRose Nethercott’s first novel builds on her work as a folklorist and poet. . . . Gorgeously written . . . riveting and moving.”
—Wendy Smith, The Washington Post

“At times solemn, at times playful, the [narrator] speaks to the reader like a storyteller to a crowd gathered around a campfire. . . . [Thistlefoot] balance[s] fun and solemnity, joy and suffering.”
—Mallory Yu, NPR

“An excellent dip into the darker side of Eastern European tales. . . . The author adriotly captures the challenges of adult sibling relationships in a story of survival and memory that is pure poetry, but never glosses over the violence of history.”
—Liz Braswell, The Wall Street Journal

“It’s a rare treat to find a book that moves so confidently through as many paces as GennaRose Nethercott’s Thistlefoot. . . . Nethercott builds an incredible sense of momentum. . . . On both a deeper and a more intimate scale than Neil Gaiman did in American Gods, Nethercott brings a folktale to this country and sets it loose on the road.”
—Molly Templeton, Tor

“GennaRose Nethercott is a literary trickster god who has crafted a wonderfully imaginative, wholly enchanting novel of witness, survival, memory, and family that reads like a fairy tale godfathered by Neil Gaiman and Tim Burton in a wild America alive with wonders and devils alike. Thistlefoot shimmers with magic and mayhem and a thrilling emotional momentum. Kill the lantern; Raise the ghost—the show is about to begin.”
—No. 1 New York Times bestselling author Libba Bray

“I have never found use for the word rollicking until I dove into Thistlefoot. This is a genuinely rollicking adventure. It rollicks very hard. It is skillfully stuffed with startling rollickers. Pick up this book and prepare to be thoroughly, comprehensively, joyfully rollicked.”
—Lemony Snicket

“Jewish and Eastern European folklore entwine in this magical, queer-inclusive contemporary fairytale about inherited trauma and sibling relationships. . . . A captivating read, at turns both dark, disturbing, whimsical, and sweet.”
—Margaret Kingsbury, BuzzFeed, “The Best Science Fiction and Fantasy Coming Out This Fall”

“[An] extraordinarily rich, layered debut novel. . . . The novel features an outstanding, inventive narrative that uses global folklore to examine not just the stories we tell each other but the ones we tell ourselves. . . . A quirky and heartbreaking journey through time and space that not only engrosses readers but reminds them what it means to be part of a story—particularly one as important as is shared here.”
—Patricia S. Gormley, Washington Independent Review of Books

“A clever update of the [Baba Yaga] tale we know and love, and a story of family, heritage, magic steeped in Slavic traditions—and POV chapters from the house itself. Nothing could make me (and hopefully you, also) happier.”
—Christina Orlando, Tor

“A powerful, moving look at Jewish history. . . . The concluding scenes are awe inspiring and will move readers to tears.”
—Rabbi Rachel Esserman, The Reporter

“[A] charming novel that mixes Jewish history and folklore with a story set on a journey across today’s America.”
—San Francisco Bay Times

“Nethercott’s rich reimagining of the Baba Yaga myth is accented by Jewish folktales and combines gorgeous imagery and delicate family dynamics with a good-versus-evil struggle that is generations in the making. . . . This imaginative, lyrical Slavic fantasy will captivate fans of Naomi Novik’s Spinning Silver or Katherine Arden’s The Bear and the Nightingale.”
—Jaclyn Fulwood, Shelf Awareness (starred review)

“This modern fairy tale steeped in Eastern European folklore will enchant readers looking for something fresh and different. Nethercott’s family drama is a wonderful and memorable read.”
—Debutiful

“Both a folklorist and a poet whose kaleidoscopically gorgeous The Lumberjack’s Dove was chosen by Louise Glück for the National Poetry series, Nethercott brings strong gifts to bear on this retelling of Slavic folktales. . . . at once a modern folktale, a road trip–like saga, and a chiller featuring ghosts, golems, and flesh-eating witches.”
—Barbara Hoffert, Library Journal, “Top Fall Debut Novels”

“It’s an exquisite and rare literary skillset that can produce a book so epic and adventurous in scope, yet so poetic and intimate at the sentence level. Thistlefoot isn’t just reimagined folklore—what GennaRose Nethercott has managed to do with this beautiful, haunting novel is capture so many of the disparate meanings of inheritance: the joy, heartbreak and ever-moving nature of things passed down through blood and time. This is a book to be lived in, a wild and stunning ride.”
—Omar El Akkad, author of What Strange Paradise

“Like Neil Gaiman and Susanna Clarke, GennaRose Nethercott understands the precise alchemy of darkness and whimsy that comprise all the best fairytales. Thistlefoot is a near-perfect bedtime story for grown-ups.”
—Shaun Hamill, author of A Cosmology of Monsters

“The house of fiction might have a million windows, but GennaRose Nethercott gives it legs. She is half yente, half soothsayer, her sentences bubbling over with magic and commiseration. Thistlefoot is a brave bubbe-meise and a wily campfire tale, told with compassion, hope, and endless heart.”
—Hilary Leichter, author of Temporary

“Gorgeously written. . . . This novel contains delights on every page. The author displays a capacious imagination, providing an entertaining, colorful read while grappling with subjects of utmost importance to today’s turbulent world. This book blooms from a fairy tale to a panoptic story that defies space and time, brimming with creativity, wisdom, and love.”
—Kirkus Reviews (starred review)

“Replete with beautiful metaphors and lyrical prose, poet and folklorist Nethercott’s debut novel deploys her poetic storytelling powers to spotlight the struggle against oppression. This modern-day fairy tale will ignite greater understanding of an individual’s ability to incite change with the stories they tell.”
—K.L. Romo, Library Journal (starred review)

“A heartbreaking reinterpretation of the myth of Baba Yaga. . . . Fans of thorny, contemporary retellings of folklore will appreciate Nethercott’s take on the theme of inherited trauma.”
—Publishers Weekly