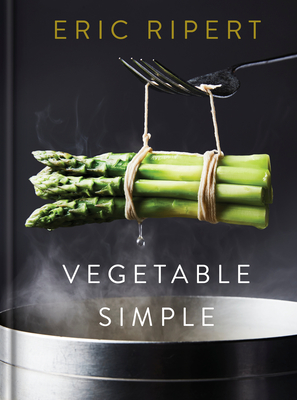 NEW YORK TIMES BESTSELLER • From one of the world’s most renowned chefs, 110 essential recipes that celebrate the beauty, simplicity, and elegance of vegetables

“The latest cookbook from the chef of Le Bernardin focuses on simple, but stunning recipes for seasonal produce. . . . What a delightful approach, especially with summer on the horizon.”—The New York Times

Eric Ripert is the chef and co-owner of the acclaimed restaurant Le Bernardin, and the winner of countless Michelin stars, well known for his exquisite, clean, seafood-centered cuisine. But lately, Ripert has found himself reaching for vegetables as his main food source—and doing so, as is his habit, with great intent and care.

In Vegetable Simple, Ripert turns his singular culinary imagination to vegetables: their beauty, their earthiness, their nourishing qualities, and the many ways they can be prepared. From vibrant Sweet Pea Soup to Fava Bean and Mint Salad, from warming Mushroom Bolognese to Roasted Carrots with Harissa, Eric Ripert articulates a vision for vegetables that are prepared simply, without complex steps or ingredients, allowing their essential qualities to shine and their color and flavor to remain uncompromised. Complete with gorgeous photos by renowned photographer Nigel Parry, this is a necessary guide for the way we eat today.

Eric Ripert is the chef and co-owner of the New York restaurant Le Bernardin, which holds three Michelin stars and has maintained a four-star rating from The New York Times for more than two decades. He is vice chairman of the board of City Harvest, a New York-based food rescue organization, as well as a recipient of the Legion d'Honneur, France's highest honor. He serves as a regular guest judge on Bravo's Top Chef and is the host of his own TV series, Avec Eric, which has won Emmy and James Beard awards. Ripert is the author of five cookbooks—My Best: Eric Ripert, Avec Eric, On the Line, A Return to Cooking, and Le Bernardin: Four Star Simplicity—and a New York Times bestselling memoir, 32 Yolks.

“The latest cookbook from the chef of Le Bernardin focuses on simple, but stunning recipes for seasonal produce…. What a delightful approach, especially with summer on the horizon.”
—The New York Times

“The acclaimed chef, known for his way with fish at Le Bernardin, turns his exacting eye and light hand on vegetables. His deep dive was born from changes both in his work and personal life: Le Bernardin has shifted to more vegetable-focused plates, while the chef has incorporated more vegetables into his diet. The result is a book featuring a collection of recipes that are almost shockingly simple.”
—The Houston Chronicle

“Task a Michelin-starred chef with writing a vegetable cookbook and you are likely to get multiple-ingredient and complex-instruction recipes. Not so with Eric Ripert’s ‘Vegetable Simple’…. His brilliance is clear in the simplicity and ingenuity of the preparations.”
—The Post and Courier

“The chef behind Michelin three-star Le Bernardin is known for seafood, but Eric Ripert has been branching out…. With Vegetable Simple, he means the title. He gives you straightforward recipes to maximize the preparation of plants in your cooking. Inside he shows you better ways to sauté, roast, poach your way to success.”
—Robb Report (“Best New Cookbooks to Buy This Spring”)

“I’m in love with the new cookbook Vegetable Simple. Eric Ripert — the chef and owner of one of New York’s most revered Michelin-starred restaurants, Le Bernardin — is known for his refined seafood dishes, but here, he turns his eyes towards his second love, vegetables. The most amazing thing about it is how actually simple the recipes are. Like not chef-pretending-to-be-simple simple. Real life simple!”
—Jenny Rosenstrach, Dinner: A Love Story

“An excellent celebration of the vegetable dishes that have sustained [Eric Ripert] since childhood. Known for his seafood, Ripert bestows equal elegance and care to plant-based recipes, most of which call for few ingredients and focus on techniques that heighten a singular essence.… Throughout, the close-up photos by Nigel Parry elevate Ripert’s work to edible art forms…. This stunning, thoughtful guide to cooking with vegetables will delight home cooks.”
—Publishers Weekly (Starred Review)

“A new collection of meals that offer fresh twists on classic techniques.… The latest by Ripert will appeal to anyone who wants to explore vegetarian options, or who simply wants to expand their repertoire of classic dishes.”
—Library Journal

“Ripert’s leadoff recipe calls for a bag of microwave popcorn elevated with a Japanese spice mixture and citrus zests, which tells readers just how unpretentious this much-lauded Manhattan chef can be. In this paean to vegetables, Ripert ranges widely.”
—Booklist