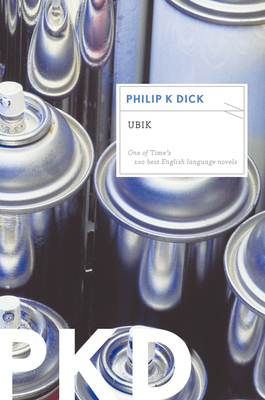 Named one of Time's 100 Best Books, Ubik is a mind-bending, classic novel about the perception of reality from Philip K. Dick, the Hugo Award-winning author of The Man in the High Castle. &#8220From the stuff of space opera, Dick spins a deeply unsettling existential horror story, a nightmare you’ll never be sure you’ve woken up from.”—Lev Grossman, Time Glen Runciter runs a lucrative business — deploying his teams of anti-psychics to corporate clients who want privacy and security from psychic spies. But when he and his top team are ambushed by a rival, he is gravely injured and placed in “half-life,” a dreamlike state of suspended animation. Soon, though, the surviving members of the team begin experiencing some strange phenomena, such as Runciter’s face appearing on coins and the world seeming to move backward in time. As consumables deteriorate and technology gets ever more primitive, the group needs to find out what is causing the shifts and what a mysterious product called Ubik has to do with it all. “More brilliant than similar experiments conducted by Pynchon or DeLillo.”—Roberto Bolaño

Over a writing career that spanned three decades, PHILIP K. DICK (1928–1982) published 36 science fiction novels and 121 short stories in which he explored the essence of what makes man human and the dangers of centralized power. Toward the end of his life, his work turned to deeply personal, metaphysical questions concerning the nature of God. Eleven novels and short stories have been adapted to film, notably Blade Runner (based on Do Androids Dream of Electric Sheep?), Total Recall, Minority Report, and A Scanner Darkly, as well as television's The Man in the High Castle. The recipient of critical acclaim and numerous awards throughout his career, including the Hugo and John W. Campbell awards, Dick was inducted into the Science Fiction Hall of Fame in 2005, and between 2007 and 2009, the Library of America published a selection of his novels in three volumes. His work has been translated into more than twenty-five languages.