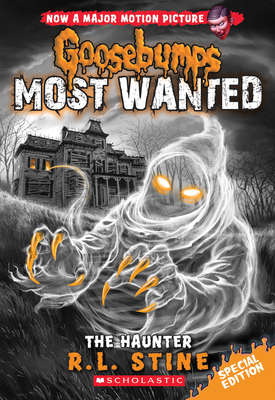 This is book number 4 in the Goosebumps Most Wanted Special Edition series.

Sammy Baker is a quiet kid who wishes he wasn't so shy and timid. He is frightened but eager to prove he can be brave. On Halloween night, he follows his friends to the Marple House, an abandoned mansion on the other side of town.

Just past midnight, he feels a cold tingle at the back of his neck. The cold seeps down, a heavy chill he has never felt before. Soon, his whole head feels like a block of ice. He's about to scream-but the cold feeling vanishes. Sammy doesn't realize that he has just met The Haunter, and that his nightmares are only just beginning.

R.L. Stine has more than 350 million English language books in print, plus international editions in 32 languages, making him one of the most popular children's authors in history. Besides Goosebumps, R.L. Stine has written other series including Fear Street, Rotten School, Mostly Ghostly, The Nightmare Room, and Dangerous Girls. R.L. Stine lives in New York with his wife, Jane, and his King Charles spaniel, Minnie. www.RLStine.com.