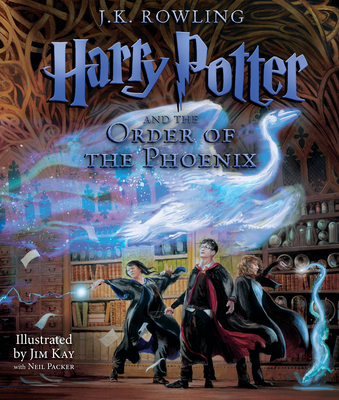 There is a door at the end of a silent corridor. And it's haunting Harry Potter's dreams. Why else would he be waking in the middle of the night, screaming in terror? It's not just the upcoming O.W.L. exams; a new teacher with a personality like poisoned honey; a venomous, disgruntled house-elf; or even the growing threat of He-Who-Must-Not-Be-Named. Now Harry Potter is faced with the unreliability of the very government of the magical world and the impotence of the authorities at Hogwarts. Despite this (or perhaps because of it), he finds depth and strength in his friends, beyond what even he knew; boundless loyalty; and unbearable sacrifice.

This stunning illustrated edition brings together the talents of award-winning artists Jim Kay and Neil Packer in a visual feast, featuring iconic scenes and much loved characters -- Tonks, Luna Lovegood, and many more -- as the Order of the Phoenix keeps watch over Harry Potter’s fifth year at Hogwarts. With its oversized format, high-quality paper, ribbon bookmark, and color on nearly every page, this edition is the perfect gift for Harry Potter fans and book lovers of all ages.

J.K. Rowling is the author of the seven Harry Potter books, which have sold over 500 million copies, been translated into over 80 languages, and made into eight blockbuster films. She also wrote three short series companion volumes for charity, including Fantastic Beasts and Where to Find Them, which later became the inspiration for a new series of films. Harry’s story as a grown-up was later continued in a stage play, Harry Potter and the Cursed Child, which J.K. Rowling wrote with playwright Jack Thorne and director John Tiffany.

In 2020, she returned to publishing for younger children with the fairy tale The Ickabog, which she initially published for free online for children in lockdown, later donating all her book royalties to help vulnerable groups affected by the Covid-19 pandemic.

J.K. Rowling has received many awards and honors for her writing, including for her detective series written under the name Robert Galbraith. She supports a wide number of humanitarian causes through her charitable trust Volant, and is the founder of the children’s care reform charity Lumos.

For as long as she can remember, J.K. Rowling wanted to be a writer, and is at her happiest in a room, making things up. She lives in Scotland with her family.

Jim Kay won the Kate Greenaway Medal in 2012 for his illustrations in A Monster Calls by Patrick Ness. Jim studied illustration at the University of Westminster and since graduating has worked in the archives of Tate Britain and the Royal Botanic Gardens at Kew. Jim has produced concept work for television and contributed to a group exhibition at the Victoria and Albert Museum in London. He now lives and works in Northamptonshire, England, with his wife.