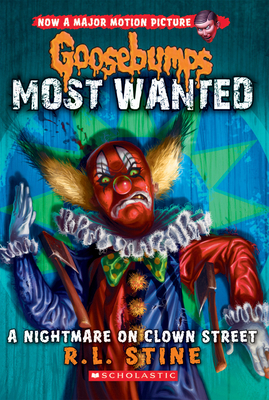 This is book number 7 in the Goosebumps: Most Wanted series.

The infamous, Most Wanted Goosebumps characters are out on the loose and they're coming after you! Catch them all, undead or alive!

Ray Gordon really likes the circus. His uncle, Theo, is a performer in Koko's Klown Academy and he invites Ray to come join him for the summer. At first, Ray's parents are reluctant-they know their son has a habit of getting himself into strange situations. But Ray manages to convince them that he'll be on his best behavior.

The circus itself is very cool. The clowns stay in their makeup all day and only go by their clown names. Ray becomes a clown-in-training named Mr. Belly-Bounce. But the longer he's there, the scarier things become. There are whisperings about a place called Clown Street and nobody, including Murder the Clown, wants to go there. Will Ray be able to survive the dark secrets of the circus?

R.L. Stine's has more than 350 million English language books in print, plus international editions in 32 languages, making him one of the most popular children's authors in history. Besides Goosebumps, R.L. Stine has written series including: Fear Street, Rotten School, Mostly Ghostly, The Nightmare Room, and Dangerous Girls. R.L. Stine lives in New York with his wife, Jane, and his King Charles spaniel, Minnie. www.RLStine.com.

"Pure, Goosebumps-style terror-by-formula, polished through use to such a high gloss that it slides along frictionlessly-a worthy celebration of the series' 20th anniversary." -Kirkus Reviews

"This book offers a great opportunity to rediscover what makes Stine so special: his swift characterizations, icky ideas, and prose that offers the exact right amount of cover-your-eyes detail." -Booklist