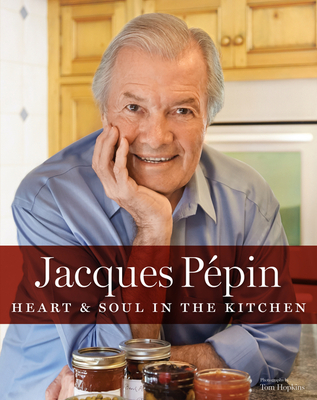 In the companion book to his final PBS series, the world-renowned chef shows his close relationship to the land and sea as he cooks for close friends and family.

Jacques Pépin Heart & Soul in the Kitchen is an intimate look at the celebrity chef and the food he cooks at home with family and friends—200 recipes in all. There are the simple dinners Jacques prepares for his wife, like the world’s best burgers (the secret is ground brisket). There are elegant dinners for small gatherings, with tantalizing starters like Camembert cheese with a pistachio crust and desserts like little foolproof chocolate soufflés. And there are the dishes for backyard parties, including grilled chicken tenderloin in an Argentinean chimichurri sauce.

Spiced with reminiscences and stories, this book reveals the unorthodox philosophy of the man who taught millions how to cook, revealing his frank views on molecular gastronomy, the locovore movement, Julia Child and James Beard, on how to raise a child who will eat almost anything, and much, much more.  For both longtime fans of Jacques and those who are discovering him for the first time, this is a must-have cookbook.

The winner of sixteen James Beard Awards and author of over 30 cookbooks, including The Apprentice, Essential Pépin, and Jacques Pépin Quick & Simple, JACQUES PEPIN is a chef, author, television personality, educator, and artist, and has starred in 12 acclaimed PBS cooking series. His dedication to culinary education led to the creation of the Jacques Pépin Foundation in 2016.

“Over the course of his years on PBS, Pepin has likely appeared in your house, and through these recipes, which he cooks at home for family and friends, he invites us into his.”  --Entertainment Weekly     “Charming and cheerful… His recipes are of the moment, his techniques timeless.”  --TheAtlantic.com   "When Pépin cooks, we pay attention. The world-renowned French chef's latest release is shaping up to be the next Dinner Party Bible, with simple, elegant dinners to make for friends and family." --People.com   "Pépin...extends 'an invitation to come over to our house for a meal' in his latest recipe collection, the companion cookbook to his 13th and final PBS TV series. These 200 recipes reflect Pépin’s 'culinary heart and soul' and are low-fuss dishes promoting enjoyment of 'wine, food, and companionship.' Pépin draws from his childhood and family table, travels, and reminiscences...[and] encourages tinkering with recipes, appreciating them as living things that can evolve according to every cook’s heart and soul."--Publishers Weekly —