The Impostor: A True Story (Paperback) 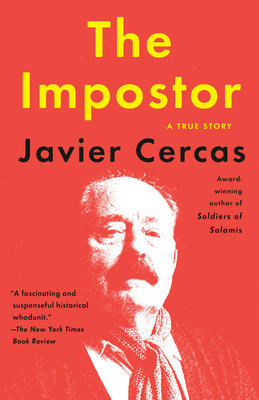 For decades, Enric Marco was revered as a veteran of the Spanish Civil War, a crusader for justice, and a Holocaust survivor. But in May 2005, at the height of his renown, he was exposed as a fraud: Marco was never in a Nazi concentration camp. And perhaps the rest of his past was fabricated, too, a combination of his delusions of grandeur and his compulsive lying. In this hypnotic narrative, which combines fiction and nonfiction, detective story and war story, biography and autobiography, Javier Cercas sets out to unravel Marco’s enigma. With both profound compassion and lacerating honesty, Cercas probes one man’s gigantic lie to explore the deepest, most flawed parts of our humanity.

Javier Cercas is a novelist and columnist whose books include Soldiers of Salamis, which has sold more than a million copies worldwide; The Speed of Light; The Anatomy of a Moment; Outlaws; and the novellas The Tenant and The Motive. His books have been translated into more than thirty languages and have received numerous international awards. He lives in Barcelona.

“Thrilling. . . . [The Impostor] vibrates with an insomniac energy. I did, too, while in its throes. There’s no looking away from it; it has the hot, charged energy of sitting through a trial.” —Parul Sehgal, The New York Times

“Magnificent. . . . A rigorous and obsessive quest to untangle what is true and what is false. . . . A subtle essay on the nature of fiction and the ways in which it can invade our lives and transform them.” —The Wall Street Journal

“The Impostor is a true story that even the most fanciful yarn-spinner would blush to invent. . . . No Spanish writer has probed the unhealed wounds of the country’s history with more subtlety and rigour than Cercas.” —The Economist

“A humane, artistically responsible and civilised book, one that you finish feeling heartened that such a serious-minded writer as Cercas is at work.” —The Sunday Times (London)

“Incandescent . . . Magnificent. . . . Fiction has replaced reality in the world we live in, and average characters from the real world don’t interest us. Fabricators do.” —Mario Vargas Llosa, El País

“While The Impostor is a biography and an historical essay, it is also a meditation on lies and fiction. . . . Javier Cercas’ trenchant writing, his range of reference, and incisive commentary . . . make his book compelling (and instructive) reading.” —The Washington Times

“Cercas is a master of narrative nonfiction. . . . [He] presents the conundrum of a country only just beginning to reconcile itself to a complicated past.” —Foreign Policy

“Both convincing and compelling. . . . A piece of nifty journalistic detective work, Cercas’s book is an insightful psychological study.” —The Spectator

“A charged examination of a surpassingly strange matter and of the masks and fictions we construct.” —Kirkus Reviews

“Cervas probes this mysterious and extraordinary life with uncommon patience, uncommon skill and uncommon sympathy. He reminds us that he is himself a novelist and that novelists tell lies as a means of pointing to some sort of truth.” —The Scotsman

“Remarkable. . . . Cercas’ analysis of post-Franco Spain will be invaluable for any non-Spaniard trying to understand this complex period. Yet it’s not just for this that The Impostor is a great book. It is also because of the intellectual depth and even-handedness with which Cercas explores [his subject’s] lifelong lie and his motivations for telling it.” —El País

“An important investigation of the role of the writer, the nature of truth and the battle between memory and history.” —BookPage

“An awful lot here resonates—not just the buzzy issues of myth-making that dominate much of contemporary politics, but more enduring questions about the nature of truth and storytelling.” —Daily Mail