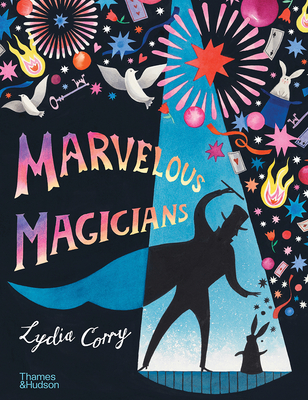 A vibrantly illustrated and engaging introduction to the illusionists, both famous and lesser-known, who shaped modern magic.

A great magician never reveals their secrets, but Marvelous Magicians reveals the names of eight groundbreaking illusionists, both famous and lesser-known, who shaped modern magic. Through a magical blend of biography, history, and illustration, this book spotlights an array of magicians, including one of the first female magicians, Adelaide Herrmann; African American illusionist Richard Potter, “The Handcuff  King” Harry Houdini, and Houdin, Houdini’s namesake and inspiration.

With two spectacular fold-out pages revealing the secret workings of the Automaton Chess Player and Howard Thurston’s dramatic transformation of an empty box into a world of wonders, this book examines the early history of magic, the eight magic effects on which all tricks are based, the necessary components of a magician’s toolbox, and the underrated role of the magician’s assistant. The book’s grand finale features advice on becoming a magician, an introduction to contemporary magicians from around the world, and an exploration of the hidden societies who have kept the secrets of illusions closely guarded for decades.

Vibrantly illustrated and written in a theatrical style, Marvelous Magicians is the perfect book for aspiring magicians who want to know more about its history and the innovators who de ned it.

Lydia Corry is a British illustrator and graduate of the Royal College of Art. Her dynamic and rich illustrations are all painted by hand.

Bold illustrations with a vaudeville feel beguile readers... Gatefolds and 90-degree rotations...make the reading experience as surprising, engaging, and occasionally disorienting as a magic act... A splendid opening act for the profession.
— Kirkus Reviews