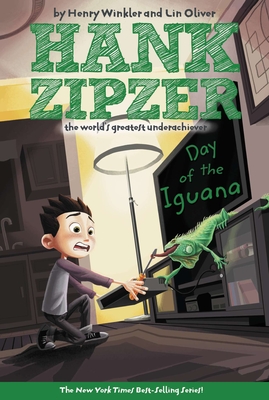 This is book number 3 in the Hank Zipzer series.

Inspired by the true life experiences of Henry Winkler, whose undiagnosed dyslexia made him a classic childhood underachiever, the Hank Zipzer series is about the high-spirited and funny adventures of a boy with learning differences.

It's science project time in Ms. Adolf's class. This is good news and bad news for Hank-he loves science, but he hates the report part. So Hank turns to TV to take his mind off things. But when the program directory scrolls by too quickly for Hank to know what's on, he decides to take apart the cable box to try to slow down the crawl. Great! Now Hank has found the perfect science project! But what he wasn't counting on was his sister's pet iguana laying eighteen eggs in the disassembled cable box. How is Hank going to get out of this one?

Henry Winkler is an acomplished actor, producer and director.  In 2003, Henry added author to his list of acheivements as he co-authored a series of children's books.  Inspired by the true life experiences of Henry Winkler, whose undiagnosed dyslexia made him a classic childhood underachiever, the Hank Zipzer series is about the high-spirited and funny adventures of a boy with learning differences.

Henry is married to Stacey Weitzman and they have three children.

Lin Oliver is a writer and producer of movies, books, and television series for children and families. She has created over one hundred episodes of television, four movies, and seven books. She lives in Los Angeles with her husband, Alan. They have three sons named Theo, Ollie, and Cole, one fluffy dog named Annie, and no iguanas.