JGV: A Life in 12 Recipes (Hardcover) 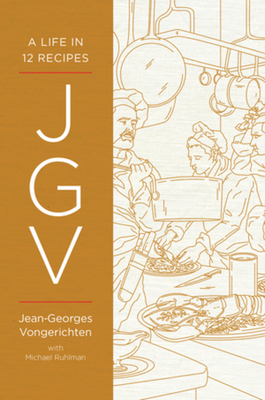 By Jean-Georges Vongerichten, Michael Ruhlman (With)
$26.95

One of the most influential chef-restaurateurs of all time reflects on a career defined by surprising, delicious food.

From his first apprenticeship in France to his Michelin-starred restaurant empire, Jean-Georges Vongerichten’s cuisine is inspired by the freshest ingredients, the simplest techniques, and the drive to make the ordinary perfect. It all started at home.

Jean-Georges was born in Alsace in eastern France to a family in the coal business. He spent his childhood watching, mesmerized, as his mother produced elaborate lunches each day at 12:30 p.m. sharp and exquisite dinners at exactly 7:30 p.m. Served rich goose stew and tender roasted local vegetables, Vongerichten’s palate was forever transformed, and such were the origins of his culinary genius.

JGV is an invitation into the kitchen with a master chef. With humor and heart, Jean-Georges looks back on success and failure, sharing stories of cooking with legendary chefs Paul Bocuse and Louis Outhier, traveling in search of new and revelatory flavors, and building menus of his own in New York City, London, Singapore, Sao Paolo, and back in France. Every story is full of wisdom, conveyed with the magnanimity and precision that has made this chef a household name.

Anchoring this remarkable memoir are twelve recipes that have defined Jean-Georges's career: an egg caviar still on his menu forty years after his mentor taught him the simple preparation; shrimp satay with a wine-oyster reduction from his landmark Lafayette restaurant; a pea guacamole that had President Obama tweeting; and more.

Enlivened with his hand-drawn sketches and intimate photographs, JGV is a book for young chefs, as well as anyone who has ever stood at a stove and wondered what might be.

Jean-Georges Vongerichten is one of the world’s most famous chefs. He is responsible for the operation and success of three- and four-star restaurants worldwide, including his flagship, Jean-Georges, in New York City.

Michael Ruhlman has written and coauthored many bestsellers, among them The Soul of a Chef, The French Laundry Cookbook, Ratio, and other books. He lives in New York City and Providence, Rhode Island, with his wife, Ann Hood.

Lush recollections of how [Vongerichten] dreamed up combinations like foie gras with mango are the book's most obvious delight. But there is also an absorbing narrative of empire-building. Vongerichten, who has opened more than seventy restaurants worldwide, provides a window into the mechanics of a globalized restaurant industry that is based as much on licensing and celebrity as on food.
— The New Yorker

A world-famous chef offers a remarkably down-to-earth take on his ascent to the upper echelons of the culinary world in this delightful memoir…Anyone curious about what drives an elite chef will want to pick this up.
— Publishers Weekly

JGV reads like Jean-Georges Vongerichten is sitting next to you at the kitchen table, telling stories about his childhood in Alsace, the knowledge he gathered working under Michelin-starred chefs....I've been recommending JGV to not only foodies but readers who love a good memoir.