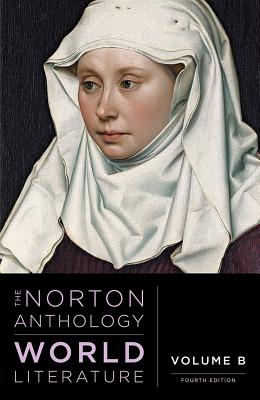 An unmatched value and an incomparable resource

The Fourth Edition of the most trusted and widely used anthology of world literature retains and expands the most popular works from the last edition, while refreshing the anthology with NEW selections and NEW translations of major works. As always, the Norton provides hundreds of literary selections, helpful apparatus, beautiful illustrations, and a robust suite of digital resources, all at an affordable price.

Martin Puchner is Byron and Anita Wien Professor of English and Comparative Literature at Harvard University, author of The Written World, and general editor of The Norton Anthology of World Literature. He lives and works in Cambridge, Massachusetts.

Suzanne Conklin Akbari is Professor of English and Medieval Studies at the University of Toronto. Her books include Seeing Through the Veil: Optical Theory and Medieval Allegory (2004) and Idols in the East: European Representations of Islam and the Orient, 1100–1450 (2009). Among her edited volumes are Marco Polo and the Encounter of East and West (2008), co-edited with Amilcare Iannucci, and the Oxford Handbook to Chaucer (2013).

Wiebke Denecke is Associate Professor of Chinese, Japanese, and Comparative Literature at Boston University. She is the author of two books, The Dynamics of Masters Literature: Early Chinese Thought from Confucius to Han Feizi (2010) and Classical World Literatures: Sino-Japanese and Greco-Roman Comparisons (forthcoming).

Barbara Fuchs is Professor of Spanish and English at UCLA, where she also directs the Center for Seventeenth- and Eighteenth-Century Studies and the William A. Clark Memorial Library. She is the author of Mimesis and Empire: The New World, Islam, and the Construction of European Identities (2001), Passing for Spain: Cervantes and the Fictions of Identity (2003), Romance (2004), and Exotic Nation: Maurophilia and the Construction of Early Modern Spain (2009). She is also a co-editor, with Aaron Ilika, of two captivity plays by Miguel de Cervantes: The Bagnios of Algiers and The Great Sultana (2009).

Caroline Levine is David and Kathleen Ryan Professor of the Humanities and Professor of English at Cornell University. She has written three books: The Serious Pleasures of Suspense: Victorian Realism and Narrative Doubt (2003), Provoking Democracy: Why We Need the Arts (2007), and Forms: Whole, Rhythm, Hierarchy, Network (2015).

Pericles Lewis is the Douglas Tracy Smith Professor of Comparative Literature at Yale University, where he also serves as Vice President for Global Strategy. He is the author of three books—Modernism, Nationalism, and the Novel (2000), The Cambridge Introduction to Modernism (2007), and Religious Experience and the Modernist Novel (2010)—and editor of The Cambridge Companion to European Modernism (2011). He was formerly Founding President and Professor of Humanities at Yale-NUS College in Singapore.

Emily Wilson is professor of classical studies and graduate chair of the Program in Comparative Literature and Literary Theory at the University of Pennsylvania. Wilson attended Oxford University (Balliol College, B.A., and Corpus Christi College, M.Phil.) and Yale University (Ph.D.). In 2006, she was named a Fellow of the American Academy in Rome in Renaissance and Early Modern scholarship, and in 2019 was named a MacArthur Fellow by the John D. and Catherine T. MacArthur Foundation. In addition to The Odyssey, she has published translations of Euripides, Sophocles, and Seneca. Among her other books are Mocked with Death: Tragic Overliving from Sophocles to Milton; The Death of Socrates: Hero, Villain, Chatterbox, Saint; The Greatest Empire: A Life of Seneca; and Faithful, a book about translation. Wilson is an editor of The Norton Anthology of World Literature and an advisory editor of the Norton Library.