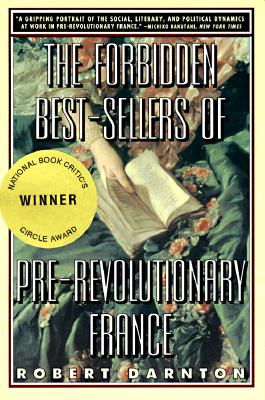 Robert Darnton's work is one of the main reasons that cultural history has become an exciting study central to our understanding of the past.

His latest book vibrates with the strange political and literary energies of ancien régime France. The Forbidden Best-Sellers of Pre-Revolutionary France traces the merging of philosophical, sexual, and anti-monarchical interests into the pulp fiction of the 1780s, banned books that make fascinating reading more than two centuries later.

French literature of the eighteenth century means to us today Rousseau and Voltaire and the "classic" texts that, we imagine, gave rise to the Revolution. Yet very few of the standard works of the Enlightenment were as widely read as books whose names we have never heard, books that were the currency of a huge literary underground during the reign of Louis XVI. Included in this volume are Darnton's translations of excerpts from three of these works.

After twenty-five years of research, Darnton has summarized his findings in one brilliant work that examines the reciprocal relationship between private literature and the public world, the (illegal) spread of Enlightenment thought, and the interesting possibility that the writings of some not-so-famous authors contributed to the fall of the French aristocracy.

Robert Darnton is the Carl H. Pforzheimer University Professor Emeritus and University Librarian Emeritus at Harvard University. His honors include a MacArthur Prize, the National Humanities Medal, the Los Angeles Times Book Prize, and election to the French Legion of Honor. He is the author of Censors at Work, The Great Cat Massacre, and The Forbidden Bestsellers of Pre-Revolutionary France, winner of the National Book Critics Circle Award.

A gripping portrait of the social, literary, and political dynamics at work in prerevolutionary France.
— Michiko Kakutani - New York Times