City of Light, City of Poison: Murder, Magic, and the First Police Chief of Paris (Hardcover) 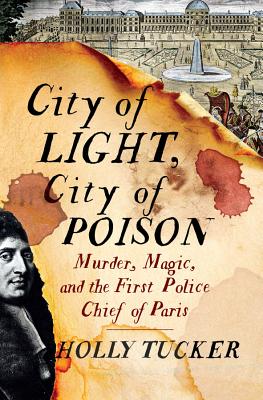 “A fierce tale of conspiracy and retribution… Thanks to Tucker’s sympathetic necromancy and her luscious resurrection of everyday detail, even in gilded palaces the human psyche seems familiarly deceitful and self-justifying.” —Michael Sims, author of The Story of Charlotte’s Web and Arthur and Sherlock

Appointed to conquer the “crime capital of the world,” the first police chief of Paris faces an epidemic of murder in the late 1600s. Assigned by Louis XIV, Nicolas de La Reynie begins by clearing the streets of filth and installing lanterns throughout Paris, turning it into the City of Light.

The fearless La Reynie pursues criminals through the labyrinthine neighborhoods of the city. He unearths a tightly knit cabal of poisoners, witches, and renegade priests. As he exposes their unholy work, he soon learns that no one is safe from black magic—not even the Sun King. In a world where a royal glance can turn success into disgrace, the distance between the quietly back-stabbing world of the king’s court and the criminal underground proves disturbingly short. Nobles settle scores by employing witches to craft poisons and by hiring priests to perform dark rituals in Paris’s most illustrious churches and cathedrals.

As La Reynie continues his investigations, he is haunted by a single question: Could Louis’s mistresses could be involved in such nefarious plots? The pragmatic and principled La Reynie must decide just how far he will go to protect his king.

From secret courtrooms to torture chambers, City of Light, City of Poison is a gripping true-crime tale of deception and murder. Based on thousands of pages of court transcripts and La Reynie’s compulsive note-taking, as well as on letters and diaries, Tucker’s riveting narrative makes the fascinating, real-life characters breathe on the page.

Holly Tucker is the author of City of Light, City of Poison and Blood Work, a finalist for the Los Angeles Times Book Prize and the Times Literary Supplement Book of the Year, and is a professor of French at Vanderbilt University. She lives in Nashville, Tennessee, and Aix-en-Provence, France.

A stylish study of crimes committed by the high and mighty during the 72-year reign of the Sun King. . . . Tucker writes with gusto . . . [and] finds high drama.
— Marilyn Stasio - New York Times Book Review

In her fascinating book, Holly Tucker fuses history and mystery to create the dramatic effect of a novel while remaining true to the real-life plots and poisons of France’s seventeenth century… A genuinely illuminating study of a remarkably amoral moment in human history.
— Deborah Blum, author of The Poisoner’s Handbook

An intriguing amalgam of historical evocation and crime narrative. . . . Tucker tells the story as if it were a classic whodunit, bringing alive an extremely complicated and baffling series of events.
— Thad Cahart - Newsday

Holly Tucker tells [this] story . . . with great gusto and with an amazing array of facts. City of Light, City of Poison conjures up 17th century Paris and makes it seem close to the present day.

City of Light, City of Poison [is] a cop drama of sorts, intermingled with a historian’s tenacious pursuit of the evidence. . . . Tucker’s way with a lavish description will have you planning your all-star adaptation of the book. . . . Fascinating.

Tucker . . . vividly brings to life a slice of Parisian history in [a] rigorously researched true-crime epic . . . [that] reads like a combination of the most compelling mystery fiction and Dumas’s romances of twisted court intrigues.
— Publishers Weekly (starred review)

City of Light, City of Poison . . . is part true crime, part history, and all scandal.