Slavery By Another Name: The Re-Enslavement of Black Americans from the Civil War to World War II (Paperback) 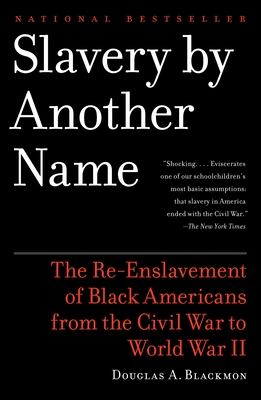 This groundbreaking historical expose unearths the lost stories of enslaved persons and their descendants who journeyed into freedom after the Emancipation Proclamation and then back into the shadow of involuntary servitude shortly thereafter in “The Age of Neoslavery.”

By turns moving, sobering, and shocking, this unprecedented Pulitzer Prize-winning account reveals the stories of those who fought unsuccessfully against the re-emergence of human labor trafficking, the companies that profited most from neoslavery, and the insidious legacy of racism that reverberates today.

Following the Emancipation Proclamation, convicts—mostly black men—were “leased” through forced labor camps operated by state and federal governments. Using a vast record of original documents and personal narratives, Douglas A. Blackmon brings to light one of the most shameful chapters in American history.

“An astonishing book. . . . It will challenge and change your understanding of what we were as Americans—and of what we are.” —Chicago Tribune

A native of Leland, Mississippi, Doug Blackmon is the Wall Street Journal's Atlanta Bureau Chief. He lives in Atlanta with his wife and their two children.

“Shocking. . . . Eviscerates one of our schoolchildren's most basic assumptions: that slavery in America ended with the Civil War.” —The New York Times

“An astonishing book. . . . It will challenge and change your understanding of what we were as Americans-and of what we are.” —Chicago Tribune

“The genius of Blackmon's book is that it illuminates both the real human tragedy and the profoundly corrupting nature of the Old South slavery as it transformed to establish a New South social order.” —The Atlanta Journal-Constitution