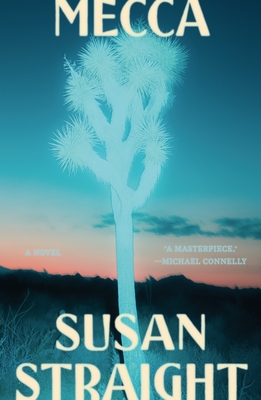 Could this be the definitive California novel of this young century? I found these interlocking stories of native Californians so profoundly moving – people who float through the Golden State, mostly indigenous or pre-border Mexican from 300 years back, the fiery backbone of the California economy, anonymous & unseen. An “American epic” as they say, just not from the usual conquering Euro-perspective. And the landscape reads EXACTLY as it truly is, written by native eyes – the dry air, the baking desert sun, the Santa Anas, the smell of the orange groves, terrifying wildfire. Gorgeous. And the ending will break your little heart.  THE BEST NOVEL ABOUT CALIFORNIA I HAVE EVER READ.  -sm

"A wide and deep view of a dynamic, multiethnic Southern California . . . Susan Straight is an essential voice in American writing and in writing of the West." —The New York Times Book Review

From the National Book Award finalist Susan Straight, Mecca is a stunning epic tracing the intertwined lives of native Californians fighting for life and land

Johnny Frías has California in his blood. A descendant of the state’s Indigenous people and Mexican settlers, he has Southern California’s forgotten towns and canyons in his soul. He spends his days as a highway patrolman pulling over speeders, ignoring their racist insults, and pushing past the trauma of his rookie year, when he killed a man assaulting a young woman named Bunny, who ran from the scene, leaving Johnny without a witness. But like the Santa Ana winds that every year bring the risk of fire, Johnny’s moment of action twenty years ago sparked a slow-burning chain of connections that unites a vibrant, complex cast of characters in ways they never see coming.

In Mecca, the celebrated novelist Susan Straight crafts an unforgettable American epic, examining race, history, family, and destiny through the interlocking stories of a group of native Californians all gasping for air. With sensitivity, furor, and a cinematic scope that captures California in all its injustice, history, and glory, she tells a story of the American West through the eyes of the people who built it—and continue to sustain it. As the stakes get higher and the intertwined characters in Mecca slam against barrier after barrier, they find that when push comes to shove, it’s always better to push back.

Susan Straight is the author of several novels, including the national bestseller Highwire Moon, a finalist for the National Book Award, and A Million Nightingales, a finalist for the Los Angeles Times Book Prize, as well as the memoir In the Country of Women, named a best book of 2019 by NPR and Real Simple. She is the recipient of the Edgar Award for Best Short Story, the O. Henry Prize, the Lannan Literary Award for Fiction, and a Guggenheim Fellowship, and her stories and essays have been published in The New Yorker, The New York Times, The Guardian, Granta, Harper’s, and elsewhere. She was born and continues to live in Riverside, California, with her family, where she serves as Distinguished Professor of Creative Writing at the University of California, Riverside.

"Straight showcases intricate intersections of personal and familial histories to create a wide and deep view of a dynamic, multiethnic Southern California . . . Susan Straight is an essential voice in American writing and in writing of the West, and Mecca is a meaningful addition to this canon. She heralds important ways of storytelling that shift how we see the land and one another." —Caribbean Fragoza, The New York Times Book Review

"A terrifically engaging novel about a network of people related by blood, love and duty . . . what might be most impressive about this novel is how large it becomes without ever feeling bloated by extraneous plotlines or too neatly sewn up . . . Remarkably, the most persistent impression here is not one of suffering but of determined survival, even triumph." —Ron Charles, The Washington Post

"[Straight] succeeds mightily in writing a new novel to be savored by not just Californians but all Americans who’ve been around the last couple of years . . . Mecca is a hymn of love and lamentation." —Bethanne Patrick, Los Angeles Times

"A fine set of interwoven tales from her California . . . [Straight's] writing is both luminous and sharp and told, as usual, through richly layered family histories." —Karen Grigsby Bates, NPR

"Triumphant, polyphonic . . . the working people behind the glamour of the Golden State are revealed in all their multiplicity, with Ms Straight’s trademark tenderness and humour . . . Like those of Louise Erdrich and William Faulkner, Ms Straight’s novels have created a fictional universe rooted in one community and place . . . Hers are true American tales, at once intimate and epic." —The Economist

"Straight connects us with her characters through her masterful, non-sentimental telling of their stories." —Barbara Lane, San Francisco Chronicle

"Straight draws together a diverse family--some by blood but many chosen--for a big-hearted and often wrenching saga . . . The act of listening and the powerful precision of language surface again and again in Mecca . . . [Straight] normalizes the grandeur of lives that might otherwise be lost to history." —Lauren LeBlanc, Boston Globe

"Straight has the great virtue of being genuinely interested in her characters. She’s best in times of quiet, when she can live in their thoughts, and over the course of this involving novel nearly all of them come to stand out on the page." —Sam Sacks, The Wall Street Journal

"An ambitious story of interconnected and diverse Southern California lives, and we’re drawn into it with ease . . . The joy, here, is falling into the rich, specific details of the characters’ lives . . . Mecca makes an argument for empathetic, formidable belief in people and place." —Heather Scott Partington, Alta

"Immensely complex, deeply atmospheric . . . a wonder of a canvas depicting one of modern America’s most dimensional societies, rendered with a beautiful authenticity." —Drew Hart, The Arts Fuse

"The author’s love of the Inland Empire and its people shines through on every page, and there is a Didionesque quality to Straight’s depiction of SoCal characters living in the shadow of prejudice and poverty, but in place of Didion’s free-floating anomie there is fierce compassion. This evokes the best California fiction." —Publishers Weekly (starred review)

"A sweeping and kaleidoscopic work . . . Her focus, as it has long been, is on people to whom the stereotypes of sun and speed and reinvention do not apply . . . This is a novel that pushes back against the clichés of Southern California to reveal the complex human territory underneath." —Kirkus (starred review)

"Mecca is a masterpiece. So elegant and beautiful, but muscled with the blood of the past—and its echoes to all things—in a sun-bleached future. Susan Straight conjures the dusty back roads and arroyos of a California where destiny is as fraught as the desert flowers on the side of the 10 freeway. This is a wonderful book." —Michael Connelly

"Against the alternating currents of boosterism and doom-speak so often associated with California, Susan Straight's Mecca focuses on the people who don’t usually appear in literary and cinematic depictions of a place so big it could be a country. A heartbreaker from beginning to end, Mecca both shocks and moves in its powerful and unrelenting portrait of this sunny, fiery state." —Viet Thanh Nguyen, author of The Sympathizer and The Committed

"The grasslands and desert, the endless blue skies torn by the Santa Ana winds and the fires that will burn it all away. Susan Straight has written a hymn to all that have called the Golden State home. Spoken in a multitude of languages, Mecca is about America's dream and finding the perilous pathways through its history." —Walter Mosley

"Mecca is beautiful, richly layered and full of a California that feels uniquely itself—but also as a stand-in for the richness of American history and our cultural mélange." —Attica Locke, author of Heaven, My Home

"Susan Straight writes like a dream. In Mecca the landscapes and the passions of California come vividly and unforgettably to life, adding another triumph to her oeuvre, and one more gift to the literature of the West. Once again, Straight shines a light on the people at the margins of our seemingly prosperous country, illuminating their lives with her boundless empathy." —Héctor Tobar, author of The Last Great Road Bum

“Mecca is an essential California epic—layered and vibrant—that is as anchored in the past as it is alive to the present. Susan Straight’s novel amplifies voices too often unheard and conjures an unforgettable vision of the golden state both heartbreaking and glorious that is destined to be canonical.” —Ivy Pochoda, author of These Women

"Mecca blows out of the California mountains and deserts with the scorching power of the Santa Ana fire winds. Susan Straight never lags in her deft portrait of the heart of the drylands of Southern California, far from beaches and Hollywood. This book speeds down the freeway like the motorcycles of her Highway Patrolman hero." —Luis Alberto Urrea, author of The House of Broken Angels

“Susan Straight knows intimately the So-Cal terrain, dry, fiery, and windy, as well as its extraordinarily beautiful weirdness. With this novel Straight invites you into its wondrous snare.” —Luis J. Rodriguez, author of From Our Land to Our Land

"Susan Straight’s page-turner of a novel Mecca corrals contemporary Southern California life while simultaneously allowing readers to see previously invisible histories. Straight’s remarkable empathy for all her characters shows her to be a loving novelist, honestly respecting the people she captures so masterfully. Just like the highways and freeways that make up the arteries of California, Straight reminds us of our collective geopolitical bloodlines, and does so with great, imaginative power." —Helena María Viramontes, author of Their Dogs Came with Them